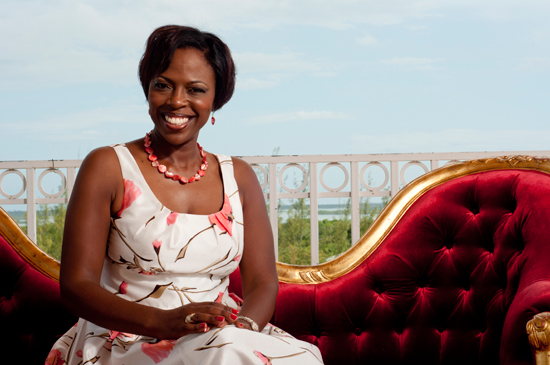 Nassau, Bahamas- Multi-talented local artist Lynn Terez Davis is a well known creative powerhouse having successfully cemented herself as an accomplished playwright and stage actress in her infamous one woman show “Hope to Cope”.

However thousands here and abroad have come to know this diverse actress and now recording artist more for her outspoken, loud yet equally colorful character “Dynamite Daisy” who stole the show as the lead character in many of her local productions.

If you ever stayed pinned to your seat at the end of a Dynamite Daisy show, Terez as she is affectionately known would execute an effortless transition from character performer to gospel songstress.

Capitalizing on the momentum of the success of her stage plays, Davis decided to spread her creative wings and enlisted the support of her brother and musician Rev.Trent Davis as well as producer Junior Scott to begin work on her first solo album.

The production duo was joined by songwriter and producer Daniel Scott CEO of Cedar Top Studios based in Ormond Beach FL, who wrote and produced the title track for what would become her debut CD “Beautiful”.

Local musician and producer Frederick Seymour rounded out the production team that collectively provided the sonic backdrop for which the raspy but bluesy vocal offering of Lynn Terez comfortably found solace. The final result is “Beautiful”, a twelve (12) track collection of traditional hymns, worship anthems and original contemporary recordings.

Lynn Terez will release her album “Beautiful” on Friday July 13th during a special album release concert at the Golden Gates Assembly World Outreach Ministries on Carmichael Road at 7:30PM.

Tickets for the concert are $10 and available at 100 Bible Bookstores (Mall at Marathon) and Maderia Street, The Christian Bookshop, Faith Life & Music Center, Logos Bookstore, Calvary Deliverance Bookstore, Seventeen Shop (Collins Ave) and at the Golden Gates World Outreach Ministries office on Carmichael Road. Copies of the album will also be on sale.

For additional information regarding purchasing copies of the album or concert tickets interested persons can contact 361-3347 or via email at lynnterezdavis@gmail.com. Packaging for the album as well as concert promotions are being coordinated by Harris Media Group.

On Sunday evening, August 2nd, 2020, the Office of The Prime released the following statement and poster...

(May 13, 2020)—The Counsellors Limited in partnership with the Eleuthera Chamber of Commerce is pleased...

During the past several weeks the Eleuthera Chamber of Commerce (ECC) has been assessing the impact of...