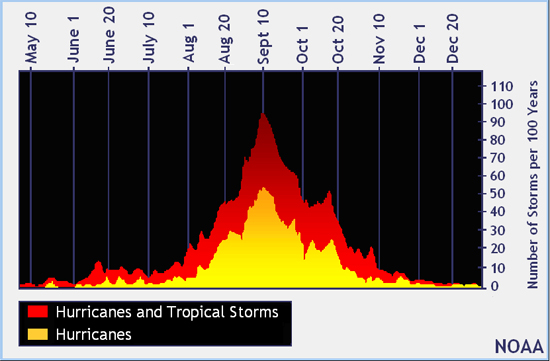 The 2016 Atlantic hurricane season officially started on June 1st, with already two named storms in the books – Hurricane Alex in January and Tropical Storm Bonnie in May. Colin will be the name of the next named storm that forms this season, which runs until November 30th. NOAA’s National Hurricane Center (NHC) in Miami, reminded its readers on Tuesday, May 31st, that “Long-term averages for the number of named storms, hurricanes, and major hurricanes are 12, 6, and 3, respectively.

The list of names (and pronounciations) for 2016 is as follows:

This week is also National Disaster Preparedness week here in The Bahamas which runs from May 29th to June 4th, 2016, under the theme: “A Comprehensive and Collaborative Approach to Disaster Management for a More Resilient Bahamas.”

In a Press Release, the Hon. Kenred Dorsett, Minister of the Environment and Housing while speaking during the Service of Thanksgiving held to kickoff the week, was quoted as saying: “We also start this week remembering all too well the massive devastation caused by the Category 4 Hurricane Joaquin, which wreaked havoc on the Central and Southeast Bahamas Family Island communities of Acklins, Crooked Island, Long Island, Rum Cay and San Salvador.

“Some eight months later, here we are, recommitting ourselves to restoring to normalcy the lives of hundreds so horribly impacted by that devastating hurricane.”

Minister Dorsett reiterated, as announced in the 2016/17 National Budget Communication in the House of Assembly on Wednesday, May 25th, delivered by the Prime Minister, the Government’s renewed commitment to make available, resources for the continued objective to building disaster resilient communities.

One of these measures outlined in the Budget is enhanced technology through an upgrading of the Trunking system, which allows for continued communication in catastrophic situations.

To date, the new technology includes a state-of-the-art, multi-agency Smart-Net Integrated Trunking Communication System, which is designed for Public Safety. The system is shared among 18 government agencies and also serves as an emergency communication system for the National Emergency Management Agency.

Another measure is under the Sandy Bottom Project, an estimated $232 million earmarked to equip the Royal Bahamas Defence Force, with state-of-the art vessels to tackle one if its mandates – disaster management and mitigation.

The HMBS Lignum Vitae and HMBS Lawrence Major have both intercepted and apprehended undocumented migrants and have provided vital assistance in bringing relief to persons affected by Hurricane Joaquin in the Family Islands.

“I wish to extend my profound thanks and gratitude to the Pastors, Deacons and members of the Kemp Road Ministries for affording us the opportunity to come together in this beautiful edifice to thank and glorify the Lord for all that He has done for this country and for all of us as a whole.

“I wish also to publicly thank and give recognition to Director of NEMA Captain Stephen Russell, his staff and members of the National Disaster Preparedness Consultative Committee for their stellar performances and commitment in assisting to keep The Bahamas safe,” Mr. Dorsett said.

He also thanked such organizations such as Head/Knowles, Arawak Port Development, the Red Cross, USAID/ODFA, PAHO and many others for rendering assistance to the hurricane victims.

SEVEN DAY FORECAST FOR THE BAHAMAS from 2nd April to 8th April, 2020

ALERT #17 (September 14th, 2019 – 6pm – FINAL Alert) – HUMBERTO IS FORECAST TO BECOME A HURRICANE BY SUNDAY NIGHT AS IT MOVES AWAY FROM THE BAHAMAS

Tropical Depression #3 which developed on Monday  July 22nd in The Bahamas, dissipated...

Synopsis for the SW N Atlantic including the Bahamas