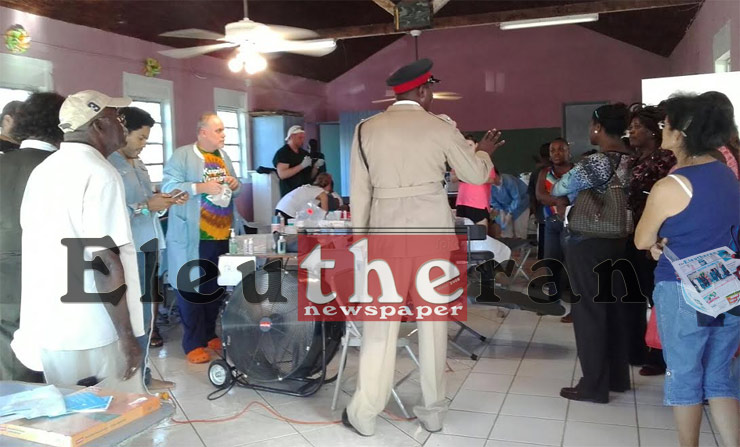 (Eleuthera, Bahamas) – A Free Dental Clinic in Gregory Town being conducted by American doctors in partnership with Eleuthera resident, and international icon, Lenny Kravitz was reportedly shut down on Monday afternoon, December 14th, 2015, during its final day by Police and Immigration, a couple hours before the visiting team were expected to complete their four-day mission and with local patients in their chairs.

The group, organised by Dr. Jonathan and Stacey Levine’s GLO Good Foundation and Lenny Kravitz’s Let Love Rule Foundation, came to Eleuthera with the intention of, “providing oral health care and education to people in need in Eleuthera, giving them the gift of a healthy smile,” according to a web promotion.

The four-day free dental clinic was held in the Catholic Church Hall in the township of Gregory Town, beginning on Friday, December 11th. Kravitz is a well-known resident of the town who has silently contributed to many initiatives across Eleuthera in addition to his immeasurable promotion of the island.

Local patients were screened on Friday, and work with patients began each morning at 8am on Saturday, Sunday and Monday.

According to eyewitnesses, Police and Immigration arrived around 3pm on Monday – 2 hours before the end of the four-day clinic, and gave the team working 15 minutes to pack up all of the equipment and cease operation.

Community patients who were receiving dental care at the time, according to witnesses, included a patient getting a set of dentures, and a root canal patient – who had their procedures summarily interrupted.

A report from police stated that, “Sometime around 1:33pm on  Saturday 12/12/15 the Police received a report that there wás a group of persons operating an illegal clinic at the Catholic Hall in Gregory Town. As a result Officers visited the location along with Immigration officers. While there they spoke with Mr. Lenny Kravitz who reported that he was hosting the free clinic through his Let Love Rule Foundation in conjunction with the GLO Good Foundation. Mr. Kravitz was not able to produce documentation authorizing the event, as a result he was informed that he was in breach of the Immigration and Public Health Acts and was instructed to cease all operations until proper authorization was obtained.”

Officials indicated that the free dental clinic was shut down on Monday because the necessary permissions from the Dental Council, Bahamas Immigration and Customs had not been secured by the group.

An eyewitness commented that the team were handled like common criminals. Officials have not confirmed witness assertions that the group offering the services were asked to accompany the officers to the Police Station along with all of the equipment which had been used during the four-day clinic. “This could have been handled much more diplomatically…and was so embarrassing,” commented a patient of the clinic.

Reportedly, after numerous calls, at about 4:45pm, this requirement was lifted and apologies were said to have been offered.

Information is that the clinic, with necessary “i’s” dotted and “t’s” crossed will be back in the new year. 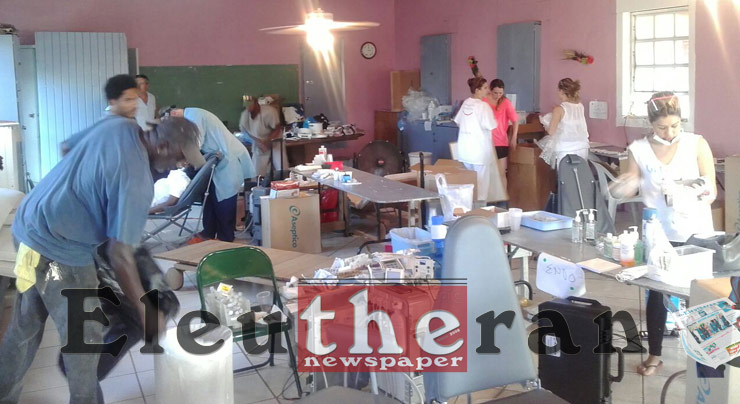 Stacey Levine, holding on to a little one as local patients are treated during the GLO Good /Let Love...

Another head-on-collision in Central Eleuthera, as a result of a tourist driving on the wrong side of...