Chairman Johnson gave a status update on a number of matters; including the massive land survey of the Commonage property, being conducted by licensed surveyor, Mr. Roderick Wood, which began in 2013 and has reportedly required intensive research; the issues surrounding additional Commonage property acquisition at the north Eleuthera airport; and a bold declaration signed by the Commonage body in early February stating the intent to begin issuing permits to allow registered commoners to begin building homes on their property. 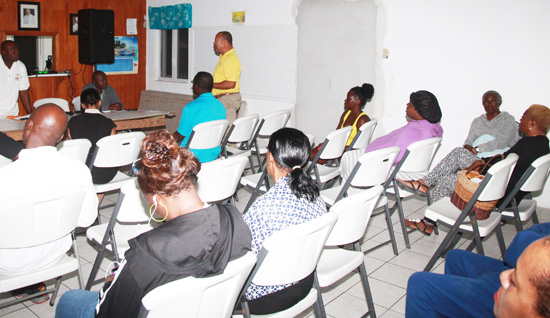 In reference to the historic challenges surrounding the extensive basic need for property among  the Commonage body for the building of homes, Johnson explained, “The Commonage Act as it reads, does not allow for any activity beyond farming, or cultivation and our concern is this:  the government has been coming for years and as they say have been ‘putting cement in the ground’ – building the airport and the well fields and things of that nature.  It appears as though the government themselves would be breaking the law as far as occupying the land – but when it comes to us being able to do the same, there is a roadblock, basically what we are looking for is for them to amend the Act, to allow for all of us to benefit from the land.”

According to Committee Chairman Johnson, an official letter was written to the Attorney General’s office one year ago, as well as previous meetings held with various Ministers, including Prime Minister Christie.  A petition was also signed by the body of commoners and sent on to the government.

Johnson stated, “In writing the government, we indicated to them that we have a model where we would like to retain the land as a Commonage body.  We do not want it to be fee simple title.  We want to all own the land together.  Our model now is that we would invest in the land ourselves or allow other investors, however, we would be the owners.  We would lease our land and the returns would come back to the Commonage body in general.  If we can reach that point everyone would benefit.”

In a bold move forward, in light of the need by many members for land to build homes, Johnson shared, “On February 2nd, 2015, a declaration was made and signed by the general body of commoners indicating and stating the we the Harbour Island Commoners declare that we will use our land for other purposes besides farming, which is basically what we requested from the government.”

This movement towards having the Act amended began some 15-20 years ago said Johnson.  He also stated that this kind of move was not new and had happened before, referencing an entire township in North Eleuthera which currently sits on Commonage property.

“We are mindful of having a proper layout, and design.  There is a plan in place and it’s just a matter of getting it done”, added Chairman Johnson as he confirmed that a Zoning Committee, to be made up of members on the mainland and on Harbour Island, is now being put in place to oversee the management of home construction requests.

In late January, approximately one month before the February 23rd Commonage meeting, according to Chairman Johnson, his Executive Committee was called to a meeting with Ministry of Transport personnel, where they were shown plans for securing the north Eleuthera airport with fencing, which would require 500 feet of property in each direction from the center of the current runway.  He reported that in checks made by the Commonage Committee about a week later it was discovered that property was being cleared up to 1600 feet from the center of the runway, with no one from the Committee having been informed of the major change.  During the February 23rd meeting, Chairman Johnson informed Commoners that since their last checks fencing work had been confined to the 500 feet as originally requested.

Even more importantly, Johnson shared, was the issue of compensation for the acquisition of Commonage property, which he communicated has never been realized, even for the original property on which the airport now sits.  During the meeting, the body agreed to have appraisals done to have current documentation on the value of the property surrounding the airport, and to prepare a list of ‘requests’ which would serve as a unified proposal for compensation concerning the new land acquisitions by the government at the north Eleuthera airport.

Licensed surveyor, Mr. Roderick Wood also made a brief presentation to the Commonage body by invitation of Chairman Johnson.  Mr. Wood, who had been preparing a boundary survey plan of the entire Commonage property during the past year and a half, announced that his research, which spanned several centuries of documentation was now complete, and that he would be ready to place the physical boundaries in the ground very soon, which would then be followed by a formal presentation of the actual boundary survey plan.  In his presentation he commented that certain traditional beliefs about the Commonage property would have to be set aside, and that his final decision was based on the documented Grant to the Commonage in 1842.

One Eleuthera Foundation Assisting with COVID-19 Front Line in Eleuthera

Commentary: Technology to Address Issues On Eleuthera and Family Islands

Author: Carlyle W. F. Bethel. I recently saw a broadcast by one of our news stations reporting on a dire...