Mrs. Fay Callender, the only surviving daughter of Mr. Gibson, accompanied by her niece, Mrs. Gail Newbold-Munroe was on island for the launch. It all kicked off  with a church service at 11am, held at the Wesley Methodist Church in Savannah Sound, where Prime Minister Perry Christie was a special guest speaker.

Following the service, the Central Eleuthera High School marching band, escorted attendees in a short march to the Longley Newberry Park, for the unveiling of a monument highlighting the life story and accomplishments of Timothy Gibson –  born in Savannah Sound, Eleuthera on April 12, 1903. 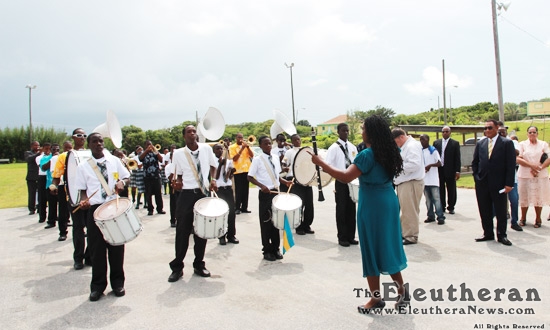 Shortly after Prime Minister Christie and family members revealed the monument, Prime Minister Christie commented that a statue of the likeness of Timothy Gibson should also be commissioned and mounted within the community of Savannah Sound, and he charged local government officials with the task of working directly with him to make it happen sooner rather than later. 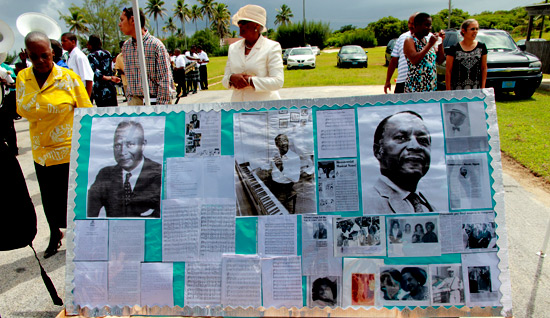 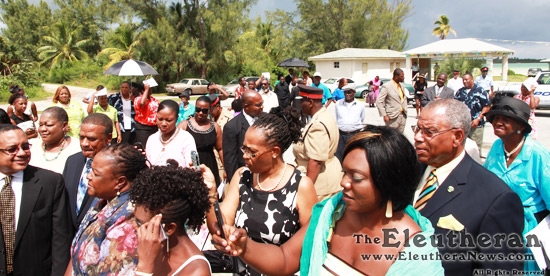 Eleutheran community members from across the island came out in support of the celebration of Mr. Gibson’s life and times.

Mrs. Callender shared after the unveiling, that the most important role Mr. Gibson had played in her life, was as her beloved father, and that was why she had made the time to be present in Eleuthera, during the launch of this week’s celebration of his life.

The week’s activities will continue with special school assemblies throughout The Eleutheras on Monday, October 7th through Thursday, October 10th, in recognition of Mr. Gibson’s national contributions.  Celebrations will culminate with a Cultural Extravaganza on Friday, October 11th, 2013 at the Longley Newberry Park in Savannah Sound, beginning at 10 am until midnight. 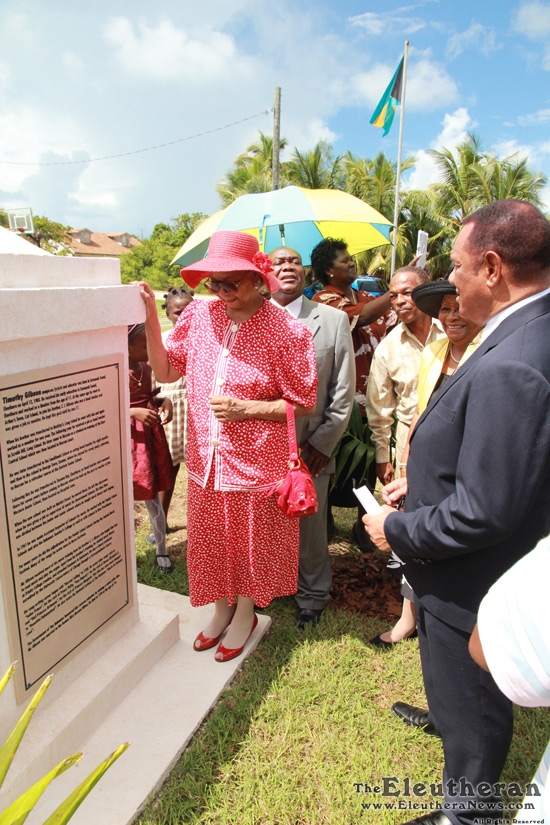 In addition to a picture of Mr. Timothy Gibson, the unveiled monument held these words:

Timothy Gibson, composer lyricist and educator was born in Savannah Sound, Eleuthera on April 12, 1903. He received his early education in Savannah Sound, Eleuthera and worked as a Monitor from the age of 11. At the same age he went to Arthur’s Town, Cat Island, to join his brother C. I. Gibson who was a head teacher and was given a job as monitor. He kept his post until he was 17.

When his brother was  transferred to Buckley’s Long Island he went with him and again worked as a monitor for one year. The following year he received a job as head teacher in Scrubb Hill, Long Island. He later came to Nassau as a student-in-training at the Boys Central School which was then located in Nassau court.

He was later transferred to the Sandilands School as acting head teacher for eight months and then to the school in George Town, Exuma, where he stayed for seven years, returning to Nassau for a refresher course at the Eastern Senior School.

Following this he was transferred to Tarpum Bay, Eleuthera, as head teacher and remained there for seven years before coming to Nassau where he took up the post as teacher at the Western Junior School, then located on Hospital Lane.

When the new school was built on Market Street, he moved there. He left the classroom when he was given a job as supervisor of music for Government Schools. His time then was divided between the junior and senior schools where he taught music theory and singing.

In 1961 he was made Assistant Inspector of Schools for music. He worked with the Family Island Schools and also the Bahamas Teacher’s College as well as with schools in New Providence.

For many years he did the adjudication for the Family Island Schools during the Annual Music Festival.  Many of the songs he wrote were in these festivals.
Mr. Gibson received most of his music training from his brother C.I. Gibson who taught him how to read music and play the organ. Apart from his brother’s training he studied music theory at Trinity College London, and attended Seminars in Delaware. He was a choral conductor accredited by the University Conservatory of Chicago through a Correspondence Course.

His song-writing career began with “Nassau Calling” in 1938. He wrote other songs such as “Sailor Prince”, for the visit of Prince Philip, “Your Majesty” for the visit of Queen Elizabeth II, and “Hail Princess Britannia”, for the visit of Princess Margaret. This title has since been changed to “Beautiful Bahamaland”.  He also wrote the National Anthem of The Bahamas “March On Bahama Land”.
The Government of The Bahamas honoured this veteran educator by naming a school after him. Mr. Gibson was married to the former Miss Rosena Hilton. He died in 1979 at the age of 76.

Please Note: Contrary to what is written on the monument, Mr. Timothy Gibson died on January 2nd 1978 at the age of 74.

The Ministry of Health and Wellness announces that Public Consultations will be held in Central and South...

More than $10,000 Raised for HACE by Catch Jerry Chile

Participants, supporters and organizers at the Catch Jerry Chile 2022 event. Now in its tenth year, the...

One Ton of Trash Cleared from Eleuthera Roadsides on Earth Day

Clean Beaches Eleuthera (CBE) celebrated one year of activism aimed at ridding the island of litter with...