Thursday, February 24th, 2022 dawned bright and beautiful – the perfect backdrop to the  climax of the ‘first ever’ Literacy Week celebration at the North Eleuthera High School (NEHS). The day saw students from both junior and senior high take part in a colourful fairy-tale character and poster parade around community streets near the school grounds, which ended in the courtyard at NEHS, where an energetic rally was held, drawing students into competitive literacy knowledge games with sweet prizes, and a hopping segment dubbed ‘In the Classroom’, which saw participating students having to keep up with the rhyme.

Teachers from the Language Arts and Guidance departments (Ms. A. Coleby, Ms. L. Rolle, Ms. D. Woods, and Ms. R. Williams), who were the main organizers of the week’s foray into reading, writing, spelling, discussion and creative expression – got into the fun swing of things on Thursday as well – performing their very own rhyme rap renditions, and as hosts of the literacy rally.

Prizes and certificates were awarded for activities held throughout the week and the literature fun wrapped up with the awaited announcement of the junior and senior class winners of the fairy-tale poster competition – with class pizza parties on the prize line. Grade 7a took the top prize in the junior high division with their rendition of a 3D Hansel and Gretel poster creation, and in the senior division, the 11b class celebrated with great excitement as their Ugly Duckling theme was called out as the winning presentation.

New principal at the school, Mrs. Chardel Brown-Gibson, who joined her teaching and administrative team at NEHS in September of 2021, actually brought the concept of “literacy week” with her from her previous posting in Spanish Wells, where she served as principal for six years. “This is our first literacy week here at the North Eleuthera High School. The chairperson was Ms. Inga Rolle. She pulled in all of the people who worked along in her department, including Ms. Coleby and Ms. Woods. Then she brought in the Guidance Department with Ms. Williams, along with some other persons to make sure that this week was a success,” shared principal Gibson. 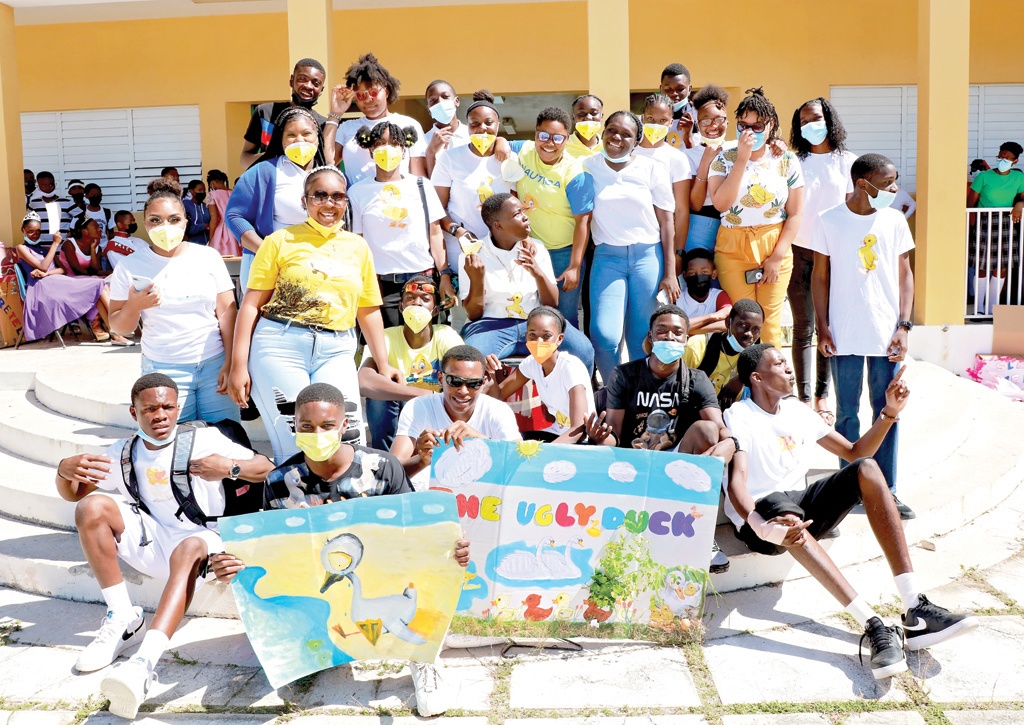 Describing the activity packed week, “We started on Monday with ‘Motivational Monday’, and each day classes were given a quote and riddles that they had to figure out. Also, teachers talked with students about books, to see what the children had already read… There was a spelling bee on Tuesday, and each teacher also had a chart in their classroom and students were encouraged to think of adjectives (like bee beautiful, bee exciting, bee helpful, and the like). On Wednesday we had table topics in the senior school – with grades 10, 11 and 12. Students had to pick a topic, and on a moment’s notice, speak on that topic. They had topics like: ‘Should marijuana be made legal’, ‘increasing the age for a driver’s license’ or ‘increasing the age to drink’ – topics like that and, ‘what is it that money cannot buy’. Students also spoke about their families, the importance of love, self-esteem, motivation, and giving themselves a second chance. They also spoke about their dreams and what they want to do in the next ten years. Everybody had something good to contribute. It was amazing to see the most unlikely people speaking so well, so fluently on each of these topics,” said Mrs. Gibson.

She continued, “Today with our march, each class had to depict a fairytale, and after the march was a big rally with games and exciting activities, like ‘In the Classroom’ – where students were challenged to keep the rhyme going… This literacy week, we wanted to get the students reading, writing and talking – focusing on their work, studying and trying to improve their grades – trying to see what it is they need to do to do better in their studies and to see what it is we need to do to help them with that improvement… We also had our prefect installations on Monday. We had 15 girls and 5 boys installed as prefects.” Mrs. Gibson noted, “One thing we want to do next year is to increase the number of boys installed.”

Asking Principal Gibson about distinctions in her move from Spanish Wells to North Eleuthera High School, she shared, “It’s different, coming from Samuel Guy Pinder, where the school was surrounded and cushioned and supported by the community and the parents. So, coming here, I want to see if I can encourage that. I want the community to know that this is their school.  We cannot do anything without the community, and without our parents. I was so glad to see that parents came out. They dropped in at different times this week. And I’m seeing that the parental support is increasing.  I’m seeing that I can ask for something and I’m getting it. There is a lot of work that needs to be done here. We need to increase the self-esteem among the students, and let them know that they are intelligent, that they can do well – so that they can get away from the stigma that because I’m from a certain settlement I’m supposed to do only this, or from here, so I can only do that. We want them to know that every child can learn. We have this motto, ‘No child left behind.’ And that’s what we want to do here at North Eleuthera High School.”