(Updated) – The Cabinet Office advises that all Government offices will reopen on Monday, 11th September at the usual hours of operation, except on islands where there have been evacuations and those on the islands of Bimini and Grand Bahama, which have not been given the all clear.

Based on advice from The Meteorological Office, The Ministry of Education
announces the following:

ADMINISTRATORS AND TEACHERS ON ISLANDS THAT HAVE BEEN GIVEN THE
‘ALL CLEAR’ BY NEMA / THE BAHAMAS MET OFFICE, ARE ASKED TO REPORT
TO WORK ON MONDAY, SEPTEMBER 11’h 2017 AT THE REGULARLY
SCHEDULED TIME – the only exception being those islands where evacuations
have taken place.

SCHOOL WILL REOPEN FOR STUDENTS ON ISLANDS GIVEN THE ALL CLEAR ON
TUESDAY, SEPTEMBER 12th 2017 – again, the only exception being on those
islands where evacuations have taken place.

Hurricane warnings are still in effect for Bimini and Grand Bahama, therefore
schools will remain dosed on these islands until further notice.
Please note that if the ‘all dear’ is given in the next 12 hours for Bimini and Grand
Bahama, another update will be released regarding school openings for those
The Ministry of Education is taking all precautions to ensure that schools are fit to
receive students. 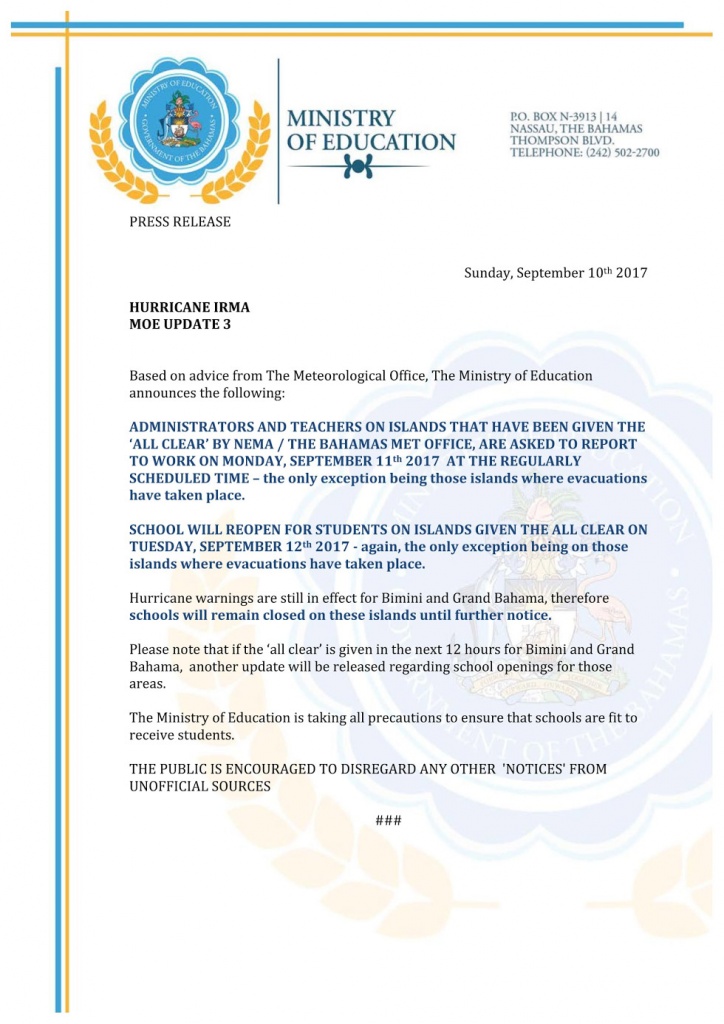