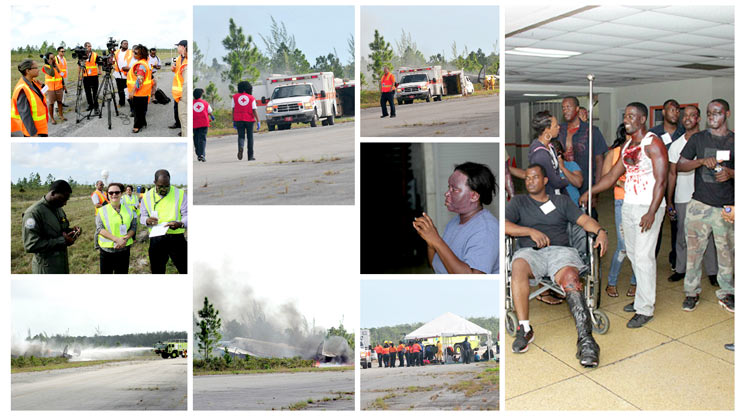 The drill took place on a vacant runway to simulate an aircraft crash accident, and test emergency response procedures and business continuity plans, following an event of this magnitude.

NAD said the event allowed participating emergency response and investigative agencies to test their operational procedures and responsiveness to ensure the highest level of readiness in the event of a real emergency.  The drill complies with international standards regulated by the International Civil Aviation Organization (ICAO), which requires that all international airports must conduct a full-scale emergency exercise every two years.

Jan Knowles, NAD Vice-President of Marketing & Communications said: “We will be looking at how we handle the emergency in terms of putting out the fire that’s going to be simulated and the time frame as it relates to that.

“This is a full crash scenario that’s done every two years.  This is of vital importance to us as an airport and as a country to be able to handle these kinds of scenarios.”

Ms. Knowles said NAD had personnel from all of the National Emergency Management Agencies as well as the Public Hospitals Authority at the drill site.

She added that the response times were already set by international agencies and NAD’s evaluation team would be monitoring those, along with other factors, to measure how well they are meeting international standards of taking care of injured persons.

As the main international gateway to The Bahamas, LPIA is the fourth busiest airport in the Caribbean, with scheduled and charter flights to the United States, Canada, Europe, and Latin America.  LPIA served 3.3 million passengers in 2014 alone.