By STAFF / in highlight / on Wednesday, 02 Dec 2015 05:48 PM / Comments Off on BIS: New Aircraft Among Government’s Priority Items for Infrastructural Investments / 5540

NASSAU, The Bahamas – The Government has given priority to infrastructural investments to ensure that there are no “significant” bottlenecks to successful marketing of the country said Deputy Prime Minister and Minister of Works and Urban Development.

“Investment in Bahamasair is one of the critical pillars of our strategy for infrastructural improvement and national economic recovery,” said Mr. Davis.

The Deputy Prime Minister presented remarks as Bahamasair commissioned the first of its $100 million fleet of five ATR 72-600 series aircraft during a ceremony at the Lynden Pindling International Airport, Tuesday. A traditional “wetting down” preceded the event.

Among those witnessing the commissioning of the state-of-the art aircraft were Members of Parliament, members of the board of directors and executive management of Bahamasair, retired Archbishop Drexel Gomez and staff of the airline. Participants included Tyrone Sawyer, Senior Director Airlift Development, Ministry of Tourism and Henry Woods, Managing Director, Bahamasair. Music was provided by the Rahming Brothers and the Royal Bahamas Police Force Pop Band.

In his address the Deputy Prime Minister remarked that the investment facilitates the encouragement of the business environment, the promotion of safety and security, bolsters the pillars for health and hygiene and ensures the vital air linking of Family Islands.

Additionally, the Deputy Prime Minister said the investment brings to the fore, “the broader indication for enabling policy and conditions to encourage growth in the tourism and transport sectors.”

He encouraged the airline to explore its options for price competitiveness as it is “critical” to implement the use of technological advances and innovative processes that can increase both efficiency and security of travel.

Moreover, Mr. Davis called on management and staff to deliver a level of service that is pleasing to passengers. 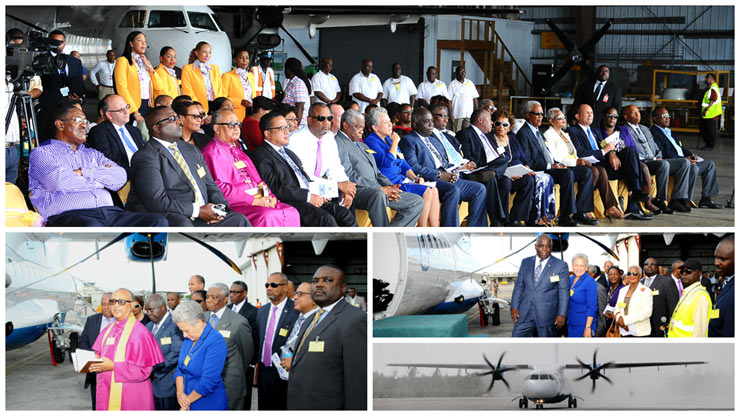 In the photos above the Bahamasair’s new ATR aircraft is commissioned in a “wet down.” following a low fly over; Retired Archbishop Drexel Gomez blesses the aircraft as officials look on; Deputy Prime Minister and Minister of Works and Urban Development Philip Davis and Minister of Transport and Aviation Glenys Hanna-Martin are pictured among other officials near the new Bahamasair aircraft.

“I am very optimistic that with the number of major projects underway in The Bahamas, and others awaiting approval there will be a need for increased airlift into New Providence, and the Family Islands. Bahamasair is expected to play a major role,” he added.

Chairman of Bahamasair Valentine Grimes described the event as a “significant milestone” in the history of Bahamasair.

He commended the engineering and technical teams led by Tracy Cooper, director of maintenance; Captain Gus Roberts, director of flight operations; and Prince Storr, project manager for their dedication to ensuring the success of the transition. He also extended appreciation to the management and staff of Bahamasair for the “noticeable improvements” in the level of service provided recently.

Minister of Transport and Aviation Glenys Hanna-Martin said Bahamasair has been “uniquely” associated with the country’s national identity.

“The fact that it has survived and done so well with the highest of standards says a lot about our country. The day reminds me that we are great country, with a great people capable of anything,” she added.

The four remaining aircraft will be delivered within the next six months. The new environmentally friendly fleet of two 70-seaters and three 50-seaters replaces the 25-year-old Dash-8s.