On Thursday July 19th, 2012 Dr. Nicholas Dawson Higgs was awarded his Ph.D. in Marine Biology from the University of Leeds in England. Nicholas is the son of Harvey and Janet Higgs of Spanish Wells, and he attended the Spanish Wells All Age School until the age of eleven.  He then spent seven years at Culford School, a Methodist boarding school in England, and then four years at Southampton University, obtaining an M.Sc. degree in Marine Biology and Oceanography.

His doctoral research was in the field of deep-sea biology, studying animals that live in the carcasses of dead whales, which fall to the bottom of the ocean and support an amazingly diverse ecosystem on the ocean floor.  Much of his research was done in conjunction with the Natural History Museum in London, and in March 2012 a team of eight scientists, led by Dr. Adrian Glover, spent a week in Spanish Wells performing marine biology experiments and establishing ‘live links’ via the internet with students in schools in England and with visitors at the Museum. 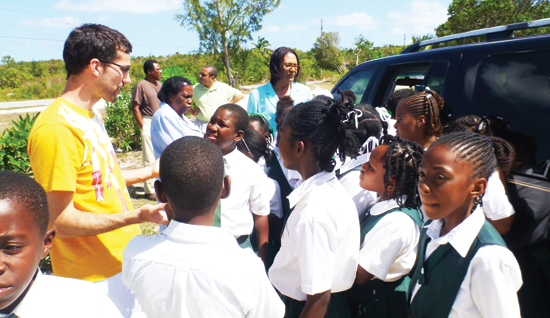 Nick with students at the Ocean Hole.

Groups of students from Grades 10 & 11 were able to visit the laboratory they had set up in Spanish Wells to sample and process the specimens they had collected, and saw video taken using an underwater camera of the sea bed off Egg Island during a voyage on board M/V ‘Dutch Bars’ and at the Ocean Hole in Rock Sound.  Edited highlights from these videos are freely available on You Tube at www.youtube.com/user/rovREX/featured.

Nick also maintains a close working relationship with Charlotte Dunn and Diane Claridge and their team at the Marine Mammal Research Organisation in Abaco.  They provided whale bone specimens for the experiments in Spanish Wells and their Education & Research assistant, Kendria Ferguson, accompanied the scientists aboard M/V ‘Dutch Bars’.
Nick has travelled extensively to Japan, Hawaii, California, Sweden, Scotland, Iceland and Italy in connection with his research and plans to attend another marine biology conference in New Zealand in December.  He is presently part of a team at the Natural History Museum creating an online database of all the deep-sea species in the world to make them more accessible. 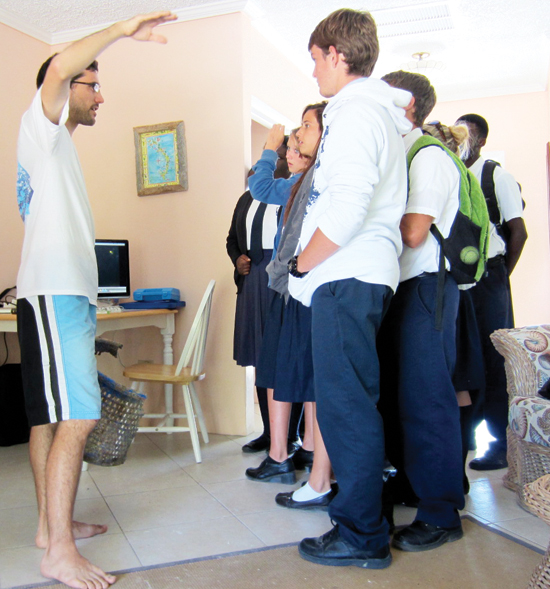 Nick with Grade 11 Students of the SWAA at a lab that was set-up to do research in Spanish Wells.

Nick hopes that more students will realise what is possible for them if they are willing to work hard and aim high.  From a very young age he has been fascinated by what he saw in the crystal waters off Eleuthera and this passion has fueled his desire to pursue a career in marine biology.  As a Christian, he continues to witness the majesty of God in the oceans and prefaced his doctoral thesis with a quotation from Psalm 104:25-29.  He and his wife Emma, a music teacher, are active in a community church near their home in London, and would one day love to return to the Bahamas to work.