(Eleuthera, Bahamas) – Seahorses are cool and visiting scientist Dr. Heather D. Mason Jones answers questions about a local seahorse population in the edited-for-length Q and A below. But first, a few fun facts! The male carries the babies. Yeah, he inflates a kangaroo-like pouch and the female drops her eggs in there. The Bahamas has the world’s slowest swimming fish – the dwarf seahorse’s top speed is 5 feet per hour. Seahorses are famous for their elaborate courtship, dancing and displaying for days.

Q: Did you confirm there are two different species of seahorse in Sweetings Pond?

A: We have collected genetic samples on the animals, small fin clips which are used commonly in work with other fish. It’s used because their swimming is unaffected and the clipped fins do grow back. We will use that data to determine the species.  From their shape and characteristics, it is really hard to tell whether they are Hippocampus reidi, Hippocampus erectus, or potentially a hybrid.  The two species are known to hybridize in captivity.  Right now, we are calling them Hippocampus reidi, based on the [last published research] done on the pond in the 1980s, until we know more about their genetics.

Q: Why is that inland lagoon so popular for them?

A: The inland lagoon seems to have few seahorse predators and lots of small shrimp food for them, and that is likely why their population is so high.  Our future research will hopefully focus on the differences between the lagoon seahorses and offshore, ocean populations to really figure out the answer to this question.  We would love to hear from locals regarding where they have seen seahorses in other places around Eleuthera! 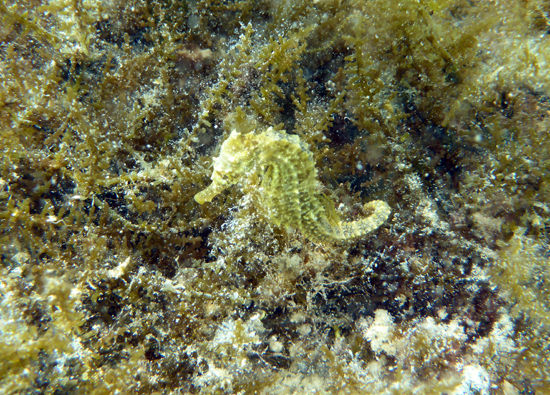 Q: What was the general health of the lagoon?

A: The lagoon appears to be a healthy ecosystem, with low levels of nitrates and phosphates (fertilizers).  Back in the 1980’s, the description of the pond included lots more Cladophora, a light green algae, that is responsive to too much fertilizer. Back then in the summer months, the Cladophora would overgrow other algae and animals (like the bivalves that are all over the bottom of the pond) and kill large areas.  Based on that observation, and the fact that we saw some of it, but not very much in one place this summer, we believe that there is less fertilizer pollution around the lake than there used to be.

Q: What do you perceive will be the biggest threats to the seahorses there?

A: I think the biggest threats to the seahorses are fertilizer use around the pond, which causes the overgrowth of Cladophora and other species of algae resulting in the death of habitat where the seahorses live (we never saw seahorses in the areas with this algae during our surveys in March and July 2014), and human over-use of the pond.  Worldwide, their populations are being decimated by the traditional medicine trade, and although there isn’t evidence of people harvesting more than crabs and octopus from the pond, the possibility exists and that worries us a lot.
Other concerns we have are for the bottom community of the pond.  Where most people access the pond is from the Hatchet Bay Caves entrance, and from our surveys, this is the most diverse and sensitive area, with coral, bivalves, coralline algae, sponges, tunicates, and many creatures living on the bottom.  This community would be extremely sensitive to being stepped on and crushed, and so we really recommend that people swimming in the pond wear snorkel gear and keep their fins at the surface, rather than stand on the bottom, to protect the seahorses and the beautiful diverse community at that end of the pond.

Q: I also heard you will recommend to the Bahamas National Trust making the area a National Park or etc? I like the idea and playing devil’s advocate would increased human recreation (snorkeling, churning) be harmful to the seahorses or are they more resilient than that?

A: I agree we should investigate both sides of the “protection” coin, and I also worry that by making the area more known, we open them up to risk.  That said, what I thought was a “secret” or unknown population of seahorses when I started this work last September, I have found in my discussions of the pond with local folks that the population is well known.  With the increased farming effort around the pond and the potential for trade in both live and dried seahorses (similar to the problems in shell trafficking between here and the U.S.), I worry that without protection, they will be depleted or their habitat may be degraded.  It is an issue either way.  If we have increased tourism, then the same problem with increased pollution and harassment of the animals will arise.  By helping BNT understand the resource they have, and trying to get local Bahamian students involved in the research, I hope to help BNT determine what the best course of action is on the issue of park or no park.

Q: What other unusual species did you discover? How deep did you go? (i.e. did the hookah rig come through?)

A: Unfortunately, the hookah rig was a bust, and we only got 2 days on it before it broke.  On dive gear we got to about 30 feet, and found that between 15-30 ft. there was little on the bottom but bivalves.  The deepest seahorse we found in surveys was about 18 ft.
The octopus are very unusual.  Because of the low density of predators, the octopus are active during the day, something we don’t see with offshore populations.  This trip we spent time just documenting the pond’s diversity, getting photographs of every new thing we found, so that we can put these photos in the hands of experts, to help understand what species are there and if they have evolved differently from similar species offshore.

Q: Heather, apart from being a Professor of Biology at University of Tampa, what other credentials do you hold? And other research projects you’ve worked on of interest?

A: I have been a faculty member at UT since 2001, becoming a full professor last year, focusing my research on seahorses and pipefish in the Gulf of Mexico, studying their population dynamics and influences of human encroachment on their numbers. In 2004, I began searching for a population of seahorses here in the Bahamas, because in Tampa, the water is so cloudy most of the year that underwater observation of the animals is really tough.  I have worked on Andros surveying for them from 2004-2005, and then was part of two excursions on the Coral Reef 2 working with BNT to survey first the Ragged Islands (2008) and then both the Exumas Land and Sea Park and South Andros (2009).  On both of those excursions I was conducting surveys for reef fish, but worked in sea grass looking for seahorses on my off time.

Q: Thanks much! Hope this helps in keeping the pond a sacred sorta place.

A: I agree, the goal is to preserve this place – never seen another spot like it – what a treasure!
Contact Dr. Mason Jones at  BahamasSeahorses@gmail.com to report a sighting.