Highlight: Bands Display in Eleuthera to Kick Off “Youth Month” 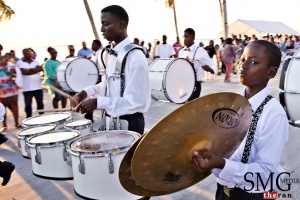 On Saturday, October 22nd, 2016, the Ministry of Youth, Sports and Culture, represented by Clara Young, in partnership with the Royal Bahamas Police Force, represented by Inspector Franklyn Neely, celebrated National Youth Month with a Fun Day and Battle of the Bands event, hosted at the Homecoming Site in the township of Rock Sound.

Spectators who came out in generous numbers to enjoy the event, however, were not disappointed.

The Central Eleuthera band, which in previous weeks had been preparing for competition in New Providence were at the top of their game and presented a top notch performance.  Also, although informal and not for competition, the Junkanoo rush out by the Preston Albury group was energetic and melodious.  The top cash prize of $1,500 was said to have been won by the Central Eleuthera band by default.

Young people and the young at heart out  at the event which kicked off at about 2pm, in addition to the marching band and junkanoo rush out also enjoyed food and drinks, face painting, cotton candy, a bouncy castle, as well as the famed ‘Ice Man’ candy giveaway.  Youth month activities wrap up on October 29th, with a service honouring Eleuthera’s youth.

Pictured above: Local Ministry of Tourism officials and RBPF officials stand with some of the Princess...