(Eleuthera, Bahamas) – Prime Minister Perry Christie announced the undertaking of a $100 million Phase 1 joint venture development by Cotton Bay Holdings Ltd. and Mine Holdings Ltd., during a Heads of Agreement signing event – for what he said would become a Four Seasons Resort and private residences at Cotton Bay – which was hosted by Columbian Investor, Luis Carlos Sarmiento Angulo, at his Cotton Bay home in South Eleuthera on Friday, May 15th, 2015.

Dr. Sarmiento Angulo, the principal owner of both Cotton Bay Holdings Ltd. and Mine Holdings Ltd., was described by Prime Minister Christie as one of the wealthiest men in South America, with well established business interests in construction, banking and finance. He has been in discussions with different governments for the past two decades about the re-development of  Cotton Bay, however this agreement represents the most significant step taken to-date. 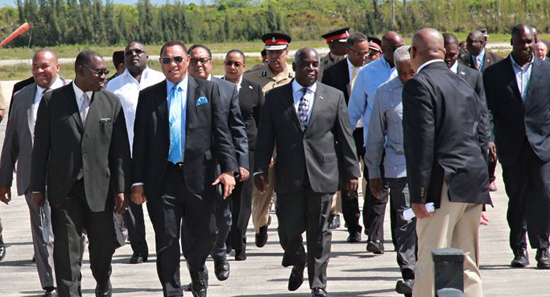 Local Bahamian artwork, said the Prime Minister, would be incorporated into the design of the development.  Commercial retail outlets at the property, with the exception of logo shops, would be operated by Bahamians, local Bahamian musicians and entertainers would also be employed, and local agricultural products would be featured at the Resort, added Christie. 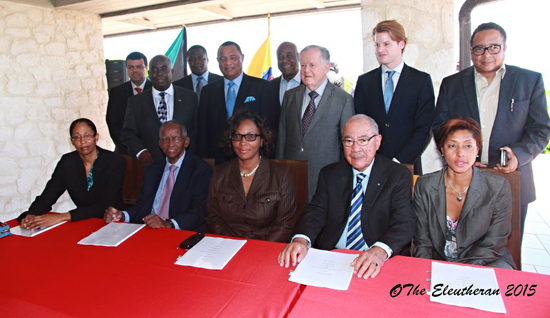 The complete build out of the project in Phase 2 was said to comprise an additional 200 lots and villas and other amenities.

Construction is expected to provide 200 jobs, said the Prime Minister, as well as 300 permanent direct jobs created with the operation of the Resort.   “The multiplier effect of indirect jobs and entrepreneurial opportunities in Eleuthera will add hundreds of additional jobs in the Eleuthera economy”, he stated.

The South Eleuthera airport facilities, he promised, would be upgraded to international IATA standards, and would allow for both day and nighttime commercial and private international flights, with refueling and adequate passenger and luggage facilities as well as improved local emergency services, to meet the brand standards of Four Seasons and other significant touristic developments taking place in the “immediate future”.

The Ministry of Tourism and the Ministry of Transport and Aviation, said Christie, would work closely with the developer, to provide marketing support as well as the required guest services and airport facilities, and would help to promote the airlift to complement the upcoming investments and facilitate travel to the destination.

Project General Manager of Cotton Bay Holdings, Mr. Juan Pulido, commented during the event on its significance, saying, “I think the most significant issue is commitment.  We have been waiting for twenty years, but we never stopped.  We persevered.  We always focused on the project, always in agreement… We want to be respected in the community and the island, so that is the vision.  We are not talking a lot, but we prefer to work… We have the drive and the commitment to be here with the development of the Resort.”

In response to Prime Minister Christie’s request during his speech for a 2015 start to the project, Mr. Pulido commented that the timeline would depend on how fast they could progress in getting details like developer licenses and design standards done.  He continued, saying that they would do their best, while staying cognizant of time.  However, he added that they did not want to make premature promises, but stated that once they had design standards and other commitments and were in position, they would communicate with the media and the community.

In May of 2012, a few days prior to the General Election,  at  a public meeting in Governor’s Harbour, former Prime Minister Hubert Ingraham had remarked on an agreement he had reached with the developer saying,”I was very pleased yesterday (May 5th,2012), ladies and gentlemen as my final act in the Cabinet of the Bahamas to finally give approval to the Sarmiento development at Cotton Bay”, adding, “… I flew to Bogota, Columbia, met with Dr. Sarmiento and we now have a deal.”  His government was voted out of office two days later.

The Heads of Agreement between the current parties was referenced by Prime Minister Christie as being imminent since the Budget debates of 2014.

The graduating Class of 2022 from North Eleuthera High School, stand proudly in front of parents, family...

During the first week in June 2022, District Superintendent of Education for the Eleuthera District,...