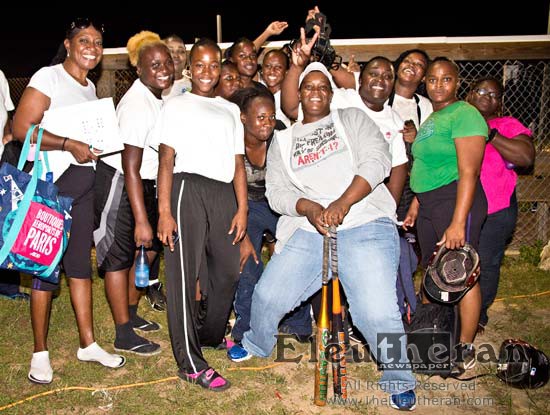 Opposing coach Rolle, steals the shot (center) as The Dynasty Ladies pose for the cameras.

The Eleuthera Softball Association (ESA) regular season of fast pitch softball, which began on May 31st, 2014, continued on Saturday, June 14th with matchups between ladies teams, the Asue Draw Phillies and the Dynasty Ladies to start the evening, followed by a hotly anticipated face off between men’s teams, the Big Tuna Construction and the AG Construction Jets.

Four female (two senior and two high school) and six male (four senior and two high school) teams are participating in the league this season, which will run throughout the summer, right on up until September – when the playoffs will begin – which will decide the top male and female teams in Eleuthera for 2014, who would go on to represent the island at the Bahamas Softball Federation’s (BSF) National Round Robin event in November 2014. 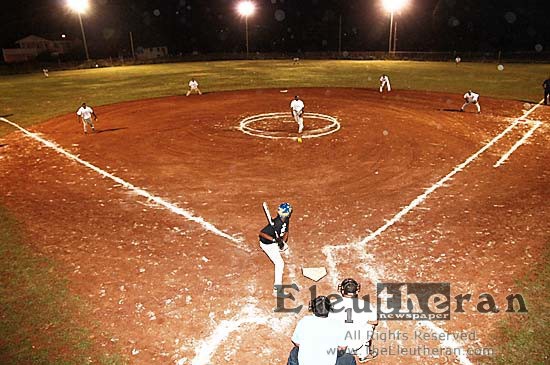 Edney Bethel of the AG Construction Jets pitched seven innings, gave up three runs, walked one and struck out 13 in an overpowering appearace against Big Tuna Construction.

The ladies’ matchup which ended shortly before 10:30pm was followed by the clash of the Big Tuna Construction and the AG Construction Jets.  As both men’s sides warmed up in anticipation of the start of the game – a spat over who should umpire ensued, causing a near 20 minute delay, before head umpire, Gerrard Coakley made his presence felt and softball play began, with Sherwin Major umpiring. 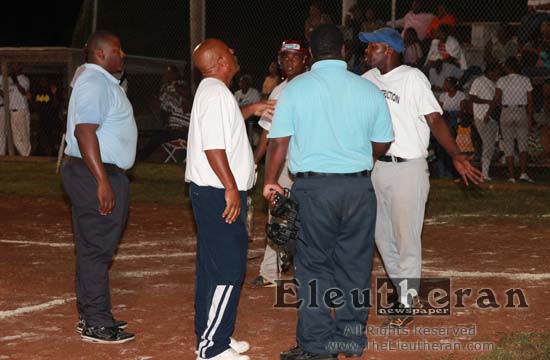 Bethel of AG Construction and Sands of Big Tuna face off in front umpires.

Coaches on both sides were loudly vocal in opposing and defending calls made, making for a palpably tense first inning, as the Jets tapped in a controversial first home run of the evening.

The teams stood at two (2) to one (1) for the Jets after the first inning, with both teams coming up dry in the second and third.  Big Tuna then tied it up in the fourth, but lost ground in the fifth – where they added one (1) run, and the Jets added two (2), leaving them at four (4) to three (3) going into the sixth – where neither team scored.  It all fell apart for Big Tuna Construction in the last inning, where the Jets added four (4) , bringing their winning tally to eight (8) runs, with Big Tuna remaining on three (3). 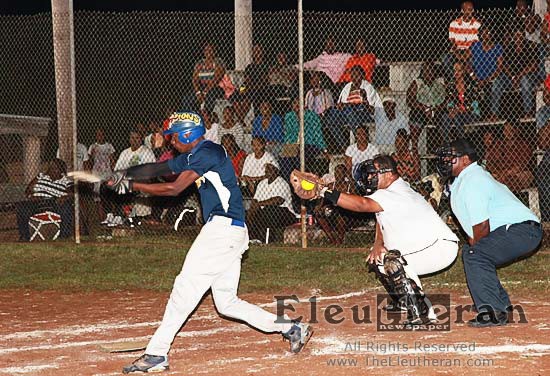 Swing and a miss!!

Softball play is scheduled to continue on Friday, June 20th with four men’s teams clashing.  The AG Construction Jets will face the Unique Hardware Hornets, beginning at 7:30 pm, followed by the Rock Sound Defenders against Big Tuna Construction to begin at 9pm in Palmetto Point.

ESA President, Mr. Romell Knowles expressed his enthusiasm for the start of the season and explained that a $2 cover charge at the games being played over the summer would help to defray the costs of the championship teams travelling into the capital in November to compete in the BSF National Round Robin event. 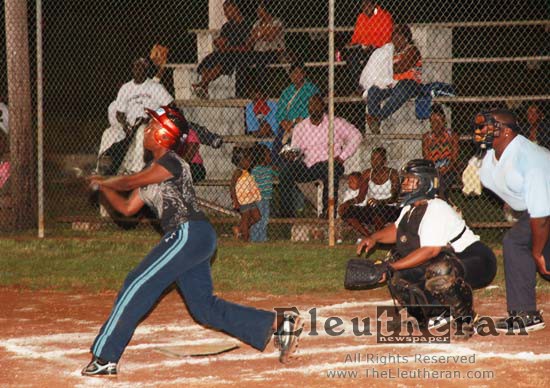 Base hit, as catcher watches the ball fly away!!