Ah, the little things. Things we can do every day that become part of our everyday lives, and just make us feel better every day. The first ‘Little Things’ can still be seen online. Yuh yuh! Got itself a permalink!

1.    Resort owners, vacation rental owners, et al; provide your guests drinking water in 5-gallon returnable jugs. You can start them with one complimentary and then they are on their own. I was happy to hear the Cove did start supplying guests with THE key to life. I’d hope somewhere like Pineapple Fields – with full kitchens – would start this. One can only imagine the quantity of gallon jugs guests must leave behind. Love the Fields by the way; great place

2.     Homeowners, especially y’all second home owners/ winter residents who leave the island for months at a time, turn over and/or seal up your water storage containers and drums. This helps with mosquito control number one, and also takes a water supply away from our invasive, introduced raccoons. Eleuthera Island Shores residents, like my wife Liz and I, keep discovering drowned raccoons in water storage containers and we discovered one still alive in April (see photo), but decided he or she would not go free to help breed more raccoons. 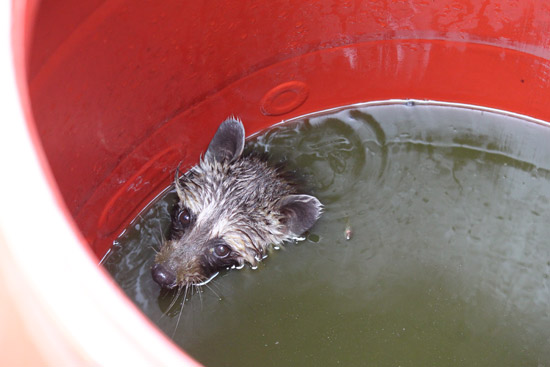 This Little Thing, part of Eleuthera’s raccoon invasion seen in the last 15 years, was trapped by his own thirst for water.
Photo by Liz Heiberg-Glucksmann

3.    Celebrate, don’t execute our snakes. While some creationists may argue snakes are the devil incarnate, I’d counter that anything that slithers is God’s creation. And He or She would not like wanton killing of any of them. And ponder this, the healthier our snake population, the less healthy is our rat and mouse population (see 2012’s Little Things about the dangers of poisoning rodents). Check out the pygmy, or dwarf, boa in Liz’s photo. This Little Thing was slithering around our patio one April morning. Eleuthera’s pygmy boa is one of four recognized subspecies in the Bahamas. 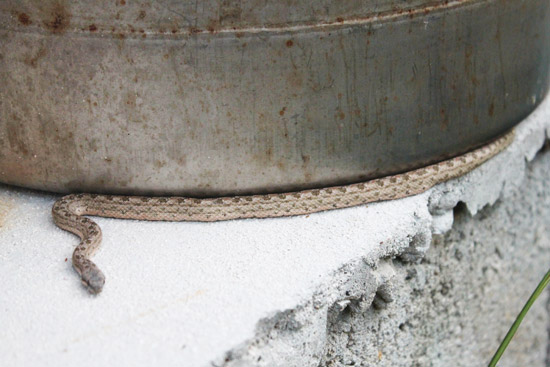 The Bahamas and Greater Carribbean area are hotbeds of dwarf boa species. Some are only just being discovered. Photo by Liz Heiberg-Glucksmann

In the Bahamas and Jamaica, dwarf boas are sometimes called “thunder snakes” or “water snakes,” possibly because they are frequently seen after heavy rains, and near swamps, wells, and water tanks. Despite the relatively small size and cryptozoic nature of dwarf boas (making them difficult to find), there is evidence that some populations may be susceptible to extirpation.
That last sentence, part of a great articulo on www.reptilia.net, is all too commonly read about the delicate subspecies that have evolved on our scattered Bahama Bank mountaintops.

And now for more Little Things:

Some of these Little Things of course are not so little, and some are; collectively they can make a big difference.