As one of the first to register for the upcoming Pineappleman Sprint Triathlon, Grand Bahama local Vicki Stafford, noted on the form, “Already booked using my Pineapple Air prize from last year.”

Stafford, 46, stormed home over fourteen minutes ahead of her nearest rival last June, to claim the women’s title in her first Pineappleman ever. Along with round trip airfare to Nassau courtesy of Pineapple Air, Stafford also won a case of Sands Beer for her efforts in the three-discipline endurance race, part of Gregory Town’s annual Pineapple Festival.

“I had a banner year in 2013,” Stafford said via email, “winning the overall women’s sprint distance title in three races.”

The blonde, blue-eyed Stafford won the Abaco triathlon in March, the Pineappleman in June and maybe most impressively, won her island’s Conchman race. The Pineappleman, which returns to the same 500-meter swim, 16-kilometer bicycle, 5K run course on June 7, stood out for more than one reason.

“My fondest memory of last year’s Pineappleman was the finish line ribbon,” Stafford said. “You always see magazine photos of race winners breaking through the finish ribbon and yet Pineappleman is the only race I have ever won that had one.  It really meant a lot to me to have a photo going through the ribbon, corny as that may sound.  I also appreciated the cold cloths the volunteers handed out during the race.”

Early registration, which is $10 cheaper, remains open until April 27. Racers may register up until, and even the morning of, the triathlon. Check in begins 7.45 a.m. The first leg of the triathlon, the swim in Gregory Town’s cove, starts promptly at 8.45 a.m.

Prizes are awarded to at least the top three finishers in Men’s and Women’s Individual, Relay (2 or 3-person) and a new Fat Tyre division, for those on cruisers or mountain bikes. 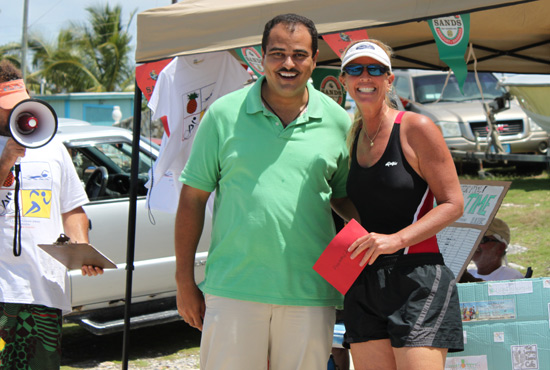 A Junior Pineappleman, dubbed the ‘Jr. Pie’, will require completion of a 100-meter swim and 800-meter run biathlon, by youth 17-and-under. Sponsor Golden Wings Charter is providing prizes for the Jr. Pie. Local youths are strongly encouraged to get involved and can contact race director Tom Glucksmann for training tips.

Pineapple Fields Resort and the Cove Resort are both offering 20% off accommodation to PIneappleman competitors for race weekend. Longtime sponsor Rainbow Inn is back aboard as a Banner Sponsor this year. Interested persons are asked to contact Glucksmann at 335-0349 or visit https://www.facebook.com/groups/pineappleman/