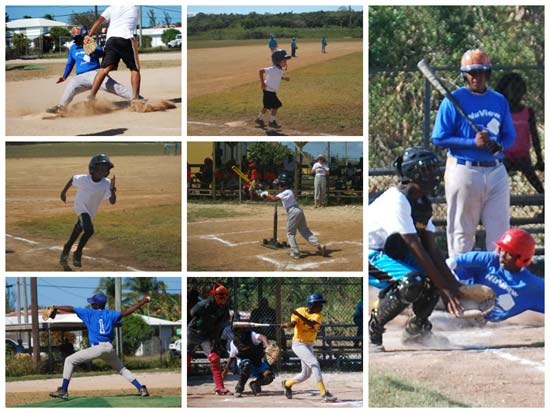 ROCK SOUND, Eleuthera- The Eleuthera Junior Baseball League of Rock Sound played week #7 games in Rock Sound. In game #1 – Tee Ball Division, the Tarpum Bay Nippers rolled over the Rock Sound Sea Grapes by the score of 20 to 4. The Nippers are dominating the Tee Ball division this year.

In game #2 – Coach Pitch Division – the Rock Sound Coco Plums defeated the  Tarpum Bay Mosquitoes 10 to 4 to even their record at 2 and 2 to keep them 2 games back of the division leading Spanish Wells  Hook n’ Jook who is perfect at 4 and
0.

In game # 3- Minor Division – the Spanish Wells Sluggers ran their record to 4 and 1 by outlasting the Green Castle Dragons 8 to 5. The winning pitcher was Toby Pinder, and the losing pitcher was Ashton Petty.

In game #4 – Junior Division – the Rock Sound Stingrays ran their record to 3 and 1 by defeating the Tarpum Bay Tarpons 8 to 2 in a very competitive game up to the 5th inning. The winning pitcher was Jonathon Brown, and the losing pitcher was Lance Pelecanos.

LEAGUE PRESIDENT LARRY FORBES HAS CANCELLED ALL GAMES FOR THIS WEEK END (WEEK # 8) TO ALLOW SOME OF THE TEAMS MEMBER TO COME WITH THEIR HIGH SCHOOL BAND TO NASSAU TO COMPETE IN THE BATTLE OF THE BAND. ALSO THER IS A DEATH IN THE TARPUM BAY BASEBALL FAMILY.

The schedule resumes next week with Week #9 games in Rock Sound.