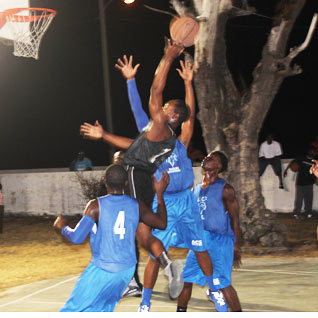 The best of five, semi-finals in the 2014 Eleuthera Basketball Association (EBA) are underway and competition is tight.

The Harbour Island Panthers kicked off their series against the Harbour Island Crusaders on March 13th with a 4pt victory 80 to 76 in Briland. Tony Oliver of the Crusaders top scored with 27 and team-mate Emo Hudson scored 17. For the panthers, KC Sawyer scored 19 and Rino Saunders 15.

Game 2, on Saturday March 15th, saw the tables turn, as the Crusaders earned a 10pt margin in a low scoring win 62 to 52.  It was the first loss of the season for the formidable Panthers and it tied the series 1:1 before game three on Tuesday.

The second series between the Governor’s Harbour Office General Kings and the Gregory Town Warriors, is also now tied at 1 game each  after a 59:56 pts victory for the Kings on Monday March 17th. Valentino Sands and Rodrick Pinder of the Kings tied with 14 pts each. Ronido Parks top scored for the Warriors with 16 pts.