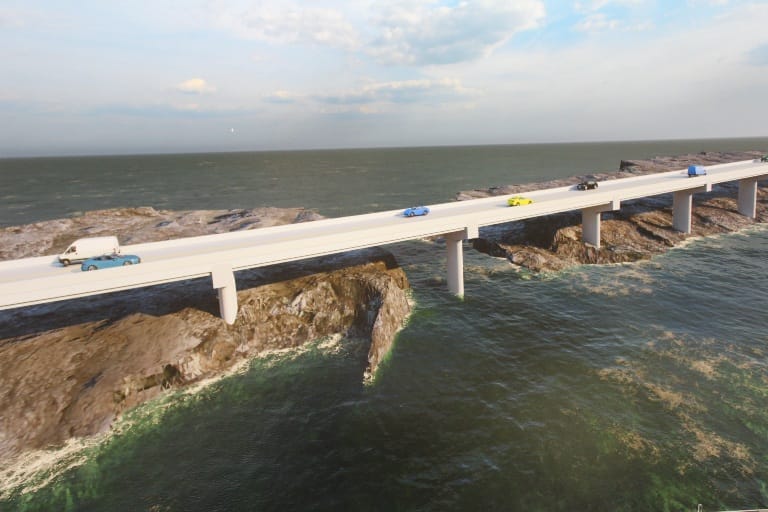 During the livestreamed event the Minister of Works and Utilities, the Hon. Alfred Sears; the Hon. Clay Sweeting, Minister of Agriculture, Marine Resources and Family Island Affairs; island administrators, representatives of the Ministry of Works, Town Planning Board, the Bridge Authority, Local Government, Lambert Knowles and other consultants, and residents of Eleuthera discussed plans for the proposed replacement of the Glass Window Bridge (GWB) in North Eleuthera.

He said lead engineer and consultant, Mr. Lambert Knowles has assembled a world-class team of bridge designers who have put together a design that will turn the GWB “into a symbol of resilience, sustainability and also a place of entertainment and relaxation where Bahamian businesses can come and share in the wonderful goods of Eleuthera to the international travelling public as well as the residents in Eleuthera.

“We’re speaking now with Caribbean Development Bank with respect to funding; the design is now completed, there is also interest in PPP’s. Within the next two months we should have a funding pathway and then of course we will move on the procurement. Once the funding is in place we will announce a date.”

“It is not only a look out point, we are approaching this project as an enterprise where the people who live in Eleuthera would have the same opportunities that the people in South would have as the Disney Project would have, but it would be more significant than Disney because this project would be owned by Bahamian people — entrepreneurs, performers and culinary artists.

“Eleuthera is one of the places in the Commonwealth of the Bahamas where development is taking place very rapidly. It is one of the most unique communities in our country; it is the fifth largest economy within the Commonwealth of the Bahamas. We have some of the wealthiest industrialists with homes in Eleuthera; we also have booming Bahamian business resorts throughout Eleuthera.”

The GWB represents a place where we “can build opportunities for Bahamian businesses, Bahamian entrepreneurs to showcase the imagination of the Bahamian crafts persons, also to showcase the culinary skills as well as the extraordinary culinary dishes of Bahamian cuisine,” he said.

Although “spectacular” Minister Sears said the current one-lane bridge is “dangerous” and unable to facilitate the transport of freight from the north to the south of the island because its carrying capacity is only 12 tonnes — anything over 12 tonnes cannot be transported over the bridge.

He noted other challenges as well and informed that the bridge is not fulfilling the potential that it has for the development of Eleuthera.

He said the proposed bridge, designed to be ‘operational at all times’, with a 60 to 70 ft. offset from the current bridge, and elevated at about 16 ft. higher, will be unique; a picture opportunity and a venue to host an event. It will have side shoulders for pedestrian traffic, a park, security, rest rooms, parking, a location for food trucks to sell crafts and food; and topography with different elevation look-outs.

During the question and answer segment, Minister Sears said a decision has not yet been made regarding a bridge toll on the major undertaking.

“It is a project which multilateral bodies and private sector investors have expressed an interest in participating in the funding. It is a project that once we have the community by-in the government is committed to building a world class production at this location.”

Construction is expected to take place on the proposed bridge from 2023-2026 at an estimated cost of $50-$60 million.

The Glass Window Bridge provides the only vehicular link between North and South Eleuthera.