Hands for Hunger (HFH), a major food bank in the Bahamas, which currently operates in New Providence piloted their first Family Island program expansion in Eleuthera with an initial distribution effort that took place during the weekend of March 26th, 2022.

Executive Director, Keisha Ellis in an interview about the visit explained, “We’ve just now grown to the place where we can begin to steadily expand into the Family Islands, and so we’ve started with Eleuthera… This is still a pilot program, so we are working out the logistics and figuring out the best way to operate – and we hope to be able to have a steady presence in Eleuthera very soon.”

Before deciding on Eleuthera, the organization first gathered information about the existing need and possible point people they could partner with to reach residents. “At the beginning of the year we took an initial trip to Eleuthera, where we actually walked around settlements in the north and the south and spoke to people. We knocked on doors, we were sitting in the parks – asking people  (do you feel that in your life you could benefit from food assistance?), and we found that there was a resounding yes from a number of people.  A number of people said that there were times where they felt they could really benefit from someone helping them with a little bit of food. So what we have heard from people is that in many cases its not that they feel they need constant assistance. But many people said they have experienced times – like when they are in between jobs, or they are waiting for a check to clear or something like that – where they can really benefit from having food assistance, like the kind that Hands for Hunger provides,” said Ms. Ellis. 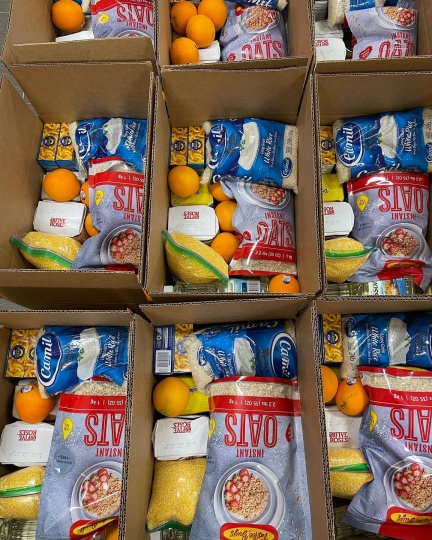 She continued, “”We’ve put together food parcels that we hope can feed a family of four for about a month. Now we wish that we could supply all of the food needs that people have. Of course that’s difficult, but we think that the food items we are providing will definitely make a difference to people – especially those that are feeling an acute and immediate need right now.” The basic makeup of the food boxes distributed by Hands for Hunger included: cereal, oats, Healthy Choice soups, tuna, sardines, mackerel, corn, fruit mix, oranges, apples, bread, eggs, tea, cream, cooking oil, rice, flour, grits, sugar, tomato paste, and Kraft macaroni.

Further explaining the organization’s overall goal on the island, Ms. Ellis said, “The way that Hands for Hunger operates is that we test out and refine models before we set up anything permanent. So, right now that’s the phase we are in – the pilot phase. We want to spend the next few months really refining the system, establishing solid partners on the island, and patching out a really good logistics plan. Once we have all of that we are hoping to be able to steadily increase the number of times we are able to distribute to Eleuthera. The culmination will be with us actually having a food pantry set up in different areas in Eleuthera – so that we are no longer sending food every few months on the mailboat, but we have a regular and permanent presence on the island… This weekend was our initial distribution and we hope to be able to do one by the next quarter, and then we will increase in frequency as we fine tune the details.”

To realize their goals on the ground HFH reached out to members of local government, church pastors and other leaders already within the communities. “So, in the north we are working with Vernon Neilly, in the south we are working with Kennord Mackey, and in central we are working with pastor Orlando Thompson – whose church does a lot of this kind of work already…,” said Ms. Ellis. Ahead of their weekend arrival HFH also established contact with individual point people or liaisons in each township throughout the island. “These are the point persons who already know their communities really well and can help us, especially for this initial trip, to target the people who can benefit most from the food that we are providing immediately.

During the March 26th weekend distribution HFH had two refrigerated trucks on the island, with one going north and the other south to be able to cover both directions. The aim was to cover at least 250 families in each area of south, central and north, with about 1000 food boxes delivered across the island.

At the end of day on the Saturday, after dropping off boxes at their final location in central Eleuthera, Ms. Ellis described, “Today has been a great experience for the Hands for Hunger team. With our two trucks, I think we can safely say that we’ve covered the island of Eleuthera as well as Current Island and Spanish Wells. We are excited to have been able to connect with the people of Eleuthera, and to be able to give a small token of a promise to work even more with the island and continue our outreach here… It has been adventure. We arrived on Friday via the Island Link with our two trucks, as well as an additional five pallets of food. With the help of amazing Eleutherans, we were able to get all the pallets off, and one truck headed north, while the other headed to Rock Sound. On Saturday, our groups hit the road at 7:30am to begin distributions in the north and south, and the two trucks both regrouped in James Cistern during the midday, where they were restocked with the additional five pallets and then continued distribution in the Central Eleuthera area. In each settlement the Hands for Hunger group connected with community point persons who collected foodboxes to redistribute to families in need in the townships.”

In Palmetto Point 50 food boxes were delivered to the Cancer Society, Eleuthera branch Wellness Center in the charge of Mrs. Sonia Moss-Sands. “I was elated when Hands for Hunger reached out to me, as I had worked with some of the organizers in other capacities… One thing I know that Covid taught us is that we cannot judge people, as the need for help comes in many faces. I did not want to tell them that it is not needed here. I told them that we would not refuse help, as there are people who would be really appreciative of it. We are working through the Cancer Society as an unbiased organization, which has already done tremendous work throughout the island of Eleuthera, and has a cover list of families in need within the community. So, I have every confidence that the food boxes will reach the hands of many of those in need. This is a pilot program with Hands for Hunger, and it’s their first time distributing on the island, so I am very happy that they chose to assist here in Eleuthera… When you go to the grocery store today and see the prices, you know the need is there, so on behalf of my area, which is Palmetto Point, I’m extremely grateful.”

Hands for Hunger, was started in 2008 by a group of college students who while sitting at a Starbucks in New Providence noticed the large amounts of food being thrown out. When they asked the company about it, they were told that as a business, the effort it would take to donate the food was not feasible.  They put forward the idea of collecting surplus fresh food, and the proposal was well received by a number of companies and organizations. This was the genesis of Hands for Hunger.

The organization currently has two refrigerated trucks, which cover New Providence, collecting surplus fresh food from various partner restaurants and hotels, and share the food with other community organizations that are feeding the public. Following hurricane Dorian in 2019, when New Providence saw an influx of displaced residents who were then food insecure, Hands for Hunger expanded their operations, helping the displaced with food vouchers, redeemable at major grocery stores. The pandemic in 2020 saw the need for even further expansion, so Hands for Hunger, which had serviced the public mainly through their local partner outreach agencies, like the children’s homes, feeding kitchen ministries, the Red Cross, Salvation Army and the like – then expanded their reach to thousands of people across New Providence directly through food boxes and vouchers. “We are still doing this now in Nassau, and hope to do the same in Eleuthera and continue as well into other family islands as we grow,” stated director Ellis.