(Family, friends, schools & others joined the Class of 2021 in celebrations across the Eleuthera District.  A myriad of ceremony formats were held across six senior high schools.)

Senior High School graduation ceremonies took place across Eleuthera during the final half of June, completing a school year that began virtually for most locations in the country during October of 2020, later transitioning to a hybrid of face-to-face and virtual in the first quarter of 2021.

Ceremonies took on a gamut of different flavours this year to suit current restrictions, with an indoor church venue service with limited-capacity seating in Spanish Wells, an outdoor – under the gazebo setting on the school grounds in Harbour Island, while outdoor tented seating was the choice in North Eleuthera – also on the grounds of the school. Rock Sound mixed it up with drive-up guests as graduates were seated along the porch for the outdoor ceremony at the school. Central Eleuthera returned to the abundant sprawl of the Longley Newberry Park in Savannah Sound, where graduates and their guests drove-up in assigned parking spots, leaving space for a marked ‘green carpet’, used by celebrating students to catwalk-it to receive their Bahamas National High School Diplomas at the park’s concreted stage.

A resounding theme at this year’s celebrations by Valedictorian’s in their speeches, was the fact that they and their graduating peers had all, ‘Made It’. The 2021 round of Commencement ceremonies began on Tuesday, June 22nd in Harbour Island at the Harbour Island All Age School (HIAAS) with twenty students participating in graduation exercises which began shortly after 10am that morning. “This is a dynamic class,” said principal Kenneth Roberts. “I am so proud of what they achieved in such a short period of time, and under such unusual circumstances. This class I think is going to set the bar for the rest of the students at this school, and I think the sky is the
limit.”

Principal Roberts who moved to Harbour Island All Age from the L.N. Coakley High School in Exuma, early in  November of 2020, said that he had mixed feelings coming from a High school to an All Age school, but that so far, the year had been a really rewarding one. “I must say that I feel enriched by this experience and exposure.”

Along with receiving their Bahamas National High School Diplomas, as well as with certificates and trophies for requisite academic, sport and community service achievements – top performing graduates were rewarded with various scholarship awards from corporate sponsors within the Harbour Island community.

The Samuel Guy Pinder All Age School (SGPAAS) 2021 commencement in Spanish Wells, with principal Chardel Brown-Gibson, was held on the following Wednesday evening, June 23rd, within the Methodist Church, and began at 6pm with supporting family and friend groupings sitting together in assigned rows.

Co-Valedictorians and also twin brothers, Chandler Mullin and Colby Mullin delivered a combined speech, where they advised their classmates to ‘own their path’, and to ‘claim their future’, saying, “We’ve made it this far, so we are strong enough to go on!” Guest speaker, Travis Newbold, from Spanish Wells, spoke to the young graduates about the power of humble service to mankind.

Principal Chardel Brown-Gibson, who joined the Samuel Guy Pinder All Age school six years ago, at the same time that the SGPAAS Class of 2021 began their junior high journey in grade seven, was very emotional as she addressed the graduates and their supporting audience of family, and friends. She described the class as ‘her babies’, and as she said farewell to them as students, she announced that she would also be saying farewell to the school as principal, having been assigned to a new posting for September 2021.

Salutatorian at SGPAAS, Delano Armbrister, who also received a special ‘Butterfly’ award during the evening for his growth in character during his high school years also presented a piece, reflecting on the past six years for the thirteen graduates.

On Friday, June 25th, twin ceremonies took place at opposite ends of the island. Preston H. Albury High School’s (PHAHS) graduation service, with principal Tracey Mackenzie, took place on the grounds of the school in Rock Sound at 10am on Friday morning. Sixteen graduates marked the successful end of high school, and the beginning of their foray into young adulthood.

Principal Mckenzie in his charge to the PHAHS graduates, congratulated them for having successfully maneuvered between the virtual and face-to-face modes of learning, and encouraged them to build on this independence in learning as they continued with their education. District Superintendent of Education for Eleuthera, Mr. Michael Culmer, who attended each public high school commencement ceremony, across the island, in his brief address to the students, highlighted to them that all the successes they were enjoying on that day, were as a result of efforts they had made earlier on. In the same way, he urged them to look at the graduation day not as an ending, but a beginning, where their efforts going forward could take them toward future successes – “Do those things that are
going to bring success!”

Later the same Friday afternoon, at the North Eleuthera High School in Lower Bogue, with principal Kevin Hepburn, commencement exercises began on the grounds of the school at 2pm. Family, friends and well-wishers sat comfortably tented on what was an extremely warm afternoon. Thirty-eight students took part in the graduation ceremony, with
seventeen of them receiving Bahamas National High School Diplomas.

Principal Hepburn, shared that in conversation with many in the twelfth grade class, he had been asked the question, ‘Where do we go from here, and what is next?’. As he addressed the graduating class, his answer was, “It is thoroughly up to you. The future is yours. You are ready and more than able to grasp the opportunities before you.”

In his Valedictorian speech, Kyle Collins, who also achieved induction into the National Honours Society, walked down the memory lane of the past six years with his classmates – the changes they experienced, the struggles, as well as the characters that made their high school journey unique. Special guest speaker that afternoon was, Phillip Moss, an alumnus of the school who graduated in 2016. He encouraged the graduating class to stay focused on the goals they set, and to not allow others to discourage their progress.

The final public high school graduation for the Central Eleuthera High School, with principal Marie Galanis, was held on Tuesday morning, June 29th, at the Longley-Newberry Park in Savannah Sound, getting started shortly after
10am. The drive-up audience of family, friends and well-wishers were neatly parked in assigned spots across the spacious area, with a marked out cat-walk carpeted in natural green in the middle, leading to the stage – where the twenty graduates were called out to take their individual celebratory walk to receive their Bahamas National High School Diplomas.

Principal Marie Galanis, who welcomed all to the commencement, told graduates that this was their day, after working and pushing to achieve the successful completion of their high school careers. “The last year and a half has proven to be the most challenging of all years – Covid-19 hit all of us and changed the platform of schooling. For some, it was an easy transition, and for others, a difficult one. Today, there are twenty of you who fought hard…” She went on to outline some of the challenges overcome by the body of graduates – affirming that they had
finally made it, and invited them to enjoy their day. Mrs. Galanis also acknowledged that she would also be moving on, as she enters retirement from her more than forty-year career in education.

Valedictorian this year for the Central Eleuthera High School, Sharico Farquharson, in his address to his class-mates, looked back at their growth together as a class, declaring that they may have started junior high as children, but were now leaving as young adults. He emphasized that this was just the beginning of their individual
journeys in life as they each now chose the path they would follow – and urged his peers to take with them not only the academic knowledge, but also the life lessons and values instilled in them by parents and teachers. He said that now was the time to put the tools that they had been given, to good use.

Windermere High School rounded out the 2021 commencement season on island with their graduation ceremony which took place on Friday, July 2nd, at 10am in Savannah Sound at the Methodist Church, with principal Myrtle McPhee.  Although a small class of five graduates, the caliber was high with Co-Valedictorian Perrell Cooper having attained the highest BGCSE results on Eleuthera in the 2020 national examinations.

Windermere’s Valedictorian Alisha Carey, was joined at the top of the class this year by Co-Valedictorian Perrell Cooper. Their peers also celebrating as graduates included; Keitrion Gilbert, Robin Rankine, and Carissa St. Charles.

(For the full photo feature on the graduating classes of 2021 throughout the Eleuthera Education District. Read The Eleutheran Newspaper June/July Issue 2021) 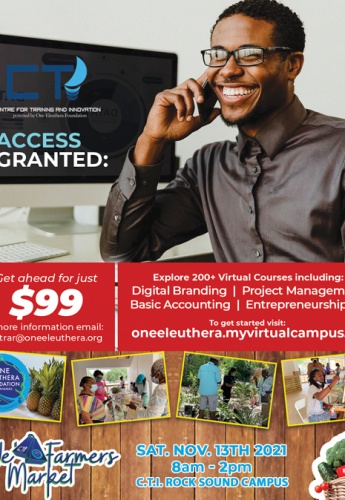