Haitian Migrants Apprehended, Third Group In As Many Weeks 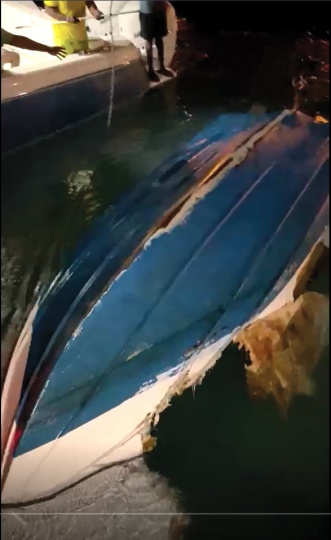 According to local eyewitnesses, the body of the young man reported as missing on Sunday evening in the boating accident was discovered on Monday morning, March 15th, 2021.  According to local residents, he was young Jay Roberts of Harbour Island, who was also a volunteer at the local food bank.

Police in Harbour Island are investigating a boating accident that took place in waters between Harbour Island and Man Island sometime after 9pm on Sunday evening, March 14th 2021, which involved two vessels and eleven (11) people and left two (2) women dead and one (1) man missing at sea.

The captain of one of the vessels involved – a 28 feet Bertram, which is used as a Ferry Boat – said RBPF’s Assistant Superintendent Audley Peters, stated that he was travelling en-route to Man Island, when he heard and felt a loud bang.  The captain continued, saying that he assumed his vessel had hit a rock, but later realized that it had collided with a 17ft Boston Whaler.

The passengers of the Boston Whaler were said to have been ejected from their vessel and into the water.

Officers from the Harbour Island Police Station, according to Peters, led a search and rescue party to the scene of the accident, and investigations determined that eight (8) people were on board the Boston Whaler, and three (3) people on the Bertram vessel.

The captain and two passengers on board the Bertram were all accounted for. However, of the eight (8) people that were on board the Boston Whaler, ASP Peters reported that the rescue team found seven (7) people – two (2) of whom were females who were pronounced dead at the Harbour Island Clinic, another two (2) females were airlifted to New Providence for medical treatment, also one (1) male and two (2) females were treated at the Harbour Island Clinic and discharged.

One (1) male who had been on board the Boston Whaler, said Peters, was unaccounted for at the time of the report, and that search and rescue efforts for him continued.

He further informed that following Police investigations, the matter will be forwarded to the Coroner for a Coroner’s Inquest.

According to local residents, the two women who died during the accident were both local young women from the North Eleuthera area – Leanna Cartwright of Gregory Town, and Candice McDonald of Lower Bogue.

Haitian Migrants Apprehended, Third Group In As Many Weeks