Sargassum Seaweed-Derived Products, Technologies and Value Chains – The Focus of a CRFM Training Workshop on March 3rd, 2021 (The Bahamas one of four countries targeted for field work)

By Staff1 / in Business, Highlight, In The News:, Nearby / on Tuesday, 02 Mar 2021 12:26 PM / Comments Off on Sargassum Seaweed-Derived Products, Technologies and Value Chains – The Focus of a CRFM Training Workshop on March 3rd, 2021 (The Bahamas one of four countries targeted for field work) / 10398 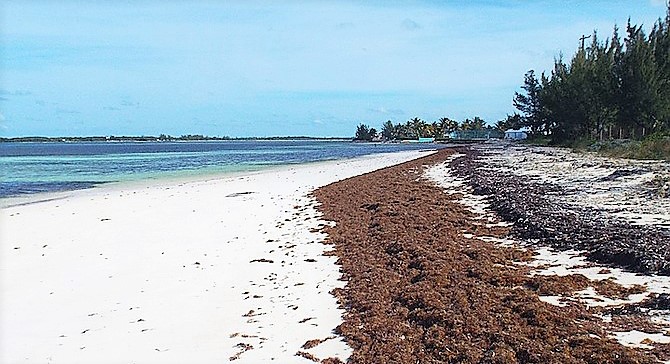 The Caribbean Regional Fisheries Mechanism (CRFM) and Plant & Food Research, a New Zealand Crown Research Institute, will host a virtual training workshop on Wednesday, 3 March 2021. The session—which will be conducted with the assistance of Prof. Mona Webber of the Marine Science Centre, UWI, Mona Campus, Jamaica—will focus on techniques for harvesting, handling, species identification and processing of Sargassum seaweed for initial evaluation.

It will be attended by the four target countries for field work, The Bahamas, Barbados, Belize, and Jamaica, as well as other interested CARICOM States and organisations such as CARDI, CERMES UWI, University of Belize, the Caribbean Network of Fisherfolk Organisation (CNFO) and IAEA.

The training supports the effective implementation of the New Zealand Ministry of Foreign Affairs and Trade-funded project entitled, Developing Sargassum Products for Climate Resilience in the Caribbean, due to commence in April 2021. In addition to the target countries, other CRFM Member States will benefit either directly or indirectly from the project, which aims to mitigate the environmental and economic impacts of Sargassum seaweed influxes in affected Caribbean countries through the creation of inclusive value chains.

Since 2011, periodic influxes of massive quantities of Sargassum seaweed have been entering Caribbean waters, resulting in substantial economic losses and adverse impacts on human and environmental health.

The Outlook of 2021 Sargassum blooms in the Caribbean Sea and Gulf of Mexico, released by the University of South Florida Optical Oceanography Lab on at the end of February 2021 indicated that, “…the eastern [Caribbean Sea] will likely experience increased amounts of Sargassum in March and April 2021, while some of the Lesser Antilles Islands will continue experiencing beaching events on both their windward leeward beaches.” It forecasted that the situation could continue into summer, with the overall bloom intensity possibly like that of 2019.

In September 2020, the CRFM entered into a 3-year collaborative agreement with Plant & Food Research, to address Sargassum seaweed influxes in affected Caribbean countries.  Plant & Food Research and the CRFM are collaborating to explore the creation of new technologies and value chains from the Sargassum seaweed. The project aims to develop
Sargassum-derived product prototypes and production processes, including a commercialisation strategy to support its marketing.

The Caribbean Regional Fisheries Mechanism (CRFM) was officially inaugurated on 27 March 2003 in Belize City, Belize, where it is headquartered, following the signing of the “Agreement Establishing the CRFM” on February 4, 2002. It is an inter-governmental organization whose mission is “to promote and facilitate the responsible utilization of the region’s fisheries and other aquatic resources for the economic and social benefits of the
current and future population of the region.”