Ninety five (95) very proud 12th graders, along with family members and friends celebrated on the morning of Friday, June 14th, 2019 at the Ministry of Education’s 2019 Bahamas National High School Diploma Graduation Ceremony for Eleuthera, at the Worker’s House Ballroom in Governor’s Harbour.

The ceremony was attended by officials from the Ministry of Education, including Assistant Director of Education, Sharmaine Sinclair, who gave an overview of the Bahamas High School Diploma program as well as a special message of inspiration to the class of 2018, telling them, “Today is all about you…  You have been prepared to exceed all expectations.  While the frontier you now face may be new to you, you have been equipped… as critical thinkers and problem solvers.”  She exhorted them to, “Exceed the status quo, set new benchmarks and establish positive trends”, adding a quote that, “Excellence is the result of always striving to do better…  Your graduation theme of , ‘Awarding excellence in education, the journey continues’, suggests moving from one starting point to another point, and as a result of the decisions you made earlier – you are now reaping your rewards.  It also suggests that the movement and the reaping are not yet done… Continue to cultivate the habit of excellence in your lives.”

Giving the Valedictorian’s address, and representing the select group of graduates inducted into the Bahamas Senior High School Honours Society, was Valedictorian for SGPAAS, Allie Pinder.  She challenged her fellow graduates to take all the lessons they had learned throughout their twelve year – primary and high school experiences – and to apply them to their future lives.  Using a softball analogy, she described them as students who had started out on the bench in primary school, who received training, molding, encouragement – and in preparation to do well, they had to train and practice and learn the skills being taught throughout the years. Now on the cusp of entering adulthood, and well equipped, she stated, “I believe that we are now qualified to enter the championship – the real world.  It’s our responsibility to make a difference, and to become the best version of ourselves as the journey continues.”

Local Minister, Diallo Ingraham, of Rock Sound, delivered the commencement message, and encouraged the new graduates to, “Take their talents to the world, work to achieve their goals, and to never stop learning…  The baton is now being passed… The opportunity is with you, no one else,” were his concluding words.

The essential minimum graduation requirements instituted, which each student aiming to graduate had to meet included the acquisition of; 4 Bahamas Junior Certificate subjects (BJC’s) in Mathematics, English Language, a Social or Technical Science (Religious Knowledge, Social Studies, Technical Drawing, or Family and Consumer Science), and a Natural Science (General Science, or Health Science); a 90% record of attendance and punctuality; 30 hours of community service; 20 hours of job readiness training; parental participation in at least 3 PTA meetings per annum; a minimum grade point average of 2.0; as well as a minimum of 27 earned high school course credits – by the end of 12th grade. 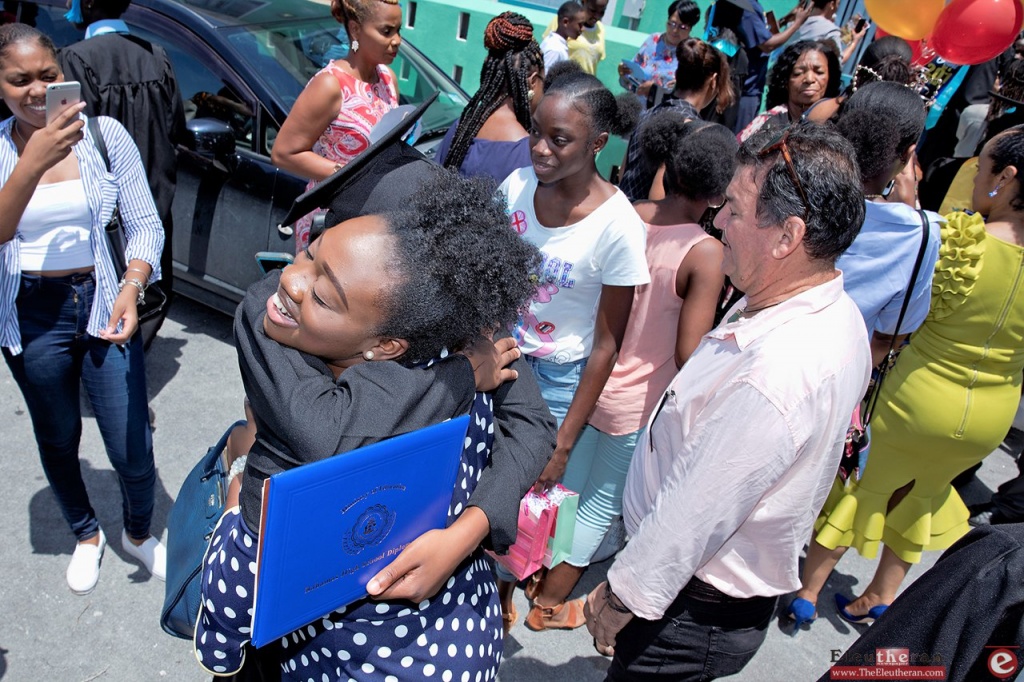 Minister of Education, the Hon. Jeffrey Lloyd discusses plans for the upcoming National Exams during...

Parents and students protest in front of the school gates at the Wemyss Bight Primary School on Wednesday...