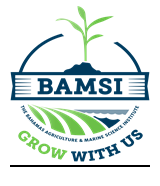 In a bid to streamline operational costs and increase the economic sustainability of the Institute, the Bahamas Agriculture and Marine Science Institute (BAMSI) is redefining its business model and will focus solely on the wholesale sector, a move which is expected to translate into increased revenue by tens of thousands of dollars, a top official with BAMSI said. With the closure of its retail centre, though a popular spot for Bahamians to purchase locally grown, organic produce, BAMSI will be able to strengthen its financial position going forward.

President of BAMSI and chairman of the Board, Tennyson Wells, said at the heart of BAMSI’s change in outlook is the government’s decision to introduce new core objectives that will position BAMSI to pay for itself over the long term. “Going forward, BAMSI’s new focus will be strengthening the academic arm of the Institute so that it can fulfill its mandate to provide scientific research covering a wide cross section of areas, including soil science, fisheries, produce and small ruminants, to the Bahamian farmer. As the recipient of cutting-edge research and innovative technologies, farmers will be able to bring best quality produce to the Bahamian market on a more consistent basis.”

Mr. Wells said the North Andros facility is also looking to grow the student population by tapping into regional and international markets and forming partnerships with international universities, and will continue to provide practical experience for students and farmers as well.

The new direction is a three-pronged approach where whatever is grown on the BAMSI farm in North Andros will be used to feed students at the Institute. The students themselves will have played an important role in producing the food as they participate in farm skills and other practical training courses. The Institute is also preparing to expand its culinary department by introducing personnel with a background in vegetarian and organic food preparation in an effort to capitalize on the expanded menu.

The remaining produce will be sold directly to wholesalers, hotels and restaurants – and this is where BAMSI expects to see an increase in its revenue. A critical component to this last element however, is consistency. BAMSI must be able to accurately predict the amount of produce that will be harvested and when.

Clifton Fernander, perishable buyer for Super Value said, “We are committed to buying local produce. If [BAMSI] can provide us with a listing of items that you will have either the week of or the week before so we can forecast, once [BAMSI] keeps it that way we will support.” He said further that BAMSI’s new focus, which removes it from the retail sector and concentrates on the wholesale market and a business to business model, is a good idea, noting once the produce is able to get into grocery stores people will see good quality, locally grown produce being sold at a good price.

Speaking about Super Value’s ability to purchase locally sourced items, Mr. Fernander said up until 2014 the mega-grocery chain had been able to purchase a higher quality produce item on a consistent basis.  “I think the last five years we have not been getting the quantities of different types of produce grown, and it has dwindled down to only a few. Since BAMSI came into play, they have taken the role of trying to produce different types of products other than the normal types such as tomatoes, cabbages, etc. BAMSI has expanded on the numbers of different types of produce grown here in the Bahamas, like broccoli, zucchini, cucumber, squash and cauliflower. I’d like to see them continue doing that. We have noticed that the quality of produce coming in through BAMSI is pretty good.”