(Eleuthera, Bahamas) – The sixth day of March dawned beautifully. I’d been up for hours, fitful sleep during the night maybe in anticipation of my birding dawn patrol.

This winter marked a new Eleuthera love affair for me, Pelecanus erythrorhynchos, the American White Pelican.  Funnily enough it began last October, far away in Missouri, in fact we zig-zagged over the Mississippi River into Illinois as well, walking and driving a migratory hot spot near Alton.

My wife, a native to the area, hoped we’d spot her homeland’s national bird – the Bald Eagle, but it was the aerial maneuvering and water landings of a species I had not expected to encounter that captured the day.

“A flock of migrating American White Pelicans is a majestic sight – a long line of ponderous birds, flapping and coasting. Each bird seems to take its cue from the one in front of it, beginning to flap and starting to glide when its predecessor does. These birds ride rising air currents to great heights, where they soar slowly and gracefully in circles. They often capture fish cooperatively, swimming in a long line, beating their wings, and driving the prey into shallow water, where they seize the fish in their large pouched bills.”

So write John Bull and John Farrand Jr. in the excellent birder’s reference, “National Audubon Society Field Guide to North American Birds”. The pelican pods at the confluence we visited, sighted their splash downs from high above, where great descending spirals of a dozen or more birds would begin. Groups swam the estuary environment; we tried getting near, but they remained wary.

A month later I was stunned to see a solitary bird in the middle of the pond at one of my favorite places in Eleuthera – James Point. I saw a solo bird a number of times in the following days, it’s impressive size, pure floating white, and unmistakable orange bill – a fun, new species to spot. Then he, or she, was gone.

Now, here I was, a cool morning in March, fleece on, binos, camera, coffee, some water, and a CD for the road. Discussions had led to this early morning mission to get photos of what I thought were five or six American White Pelicans seen in the same pond, just the day before. Concluding these representatives of what’s considered an Accidental species to the Bahamas may not stay long – a gentle, but steady south wind had begun – and our visiting pelicans might file flight plans soon, I was out the door as light crept into the sky. 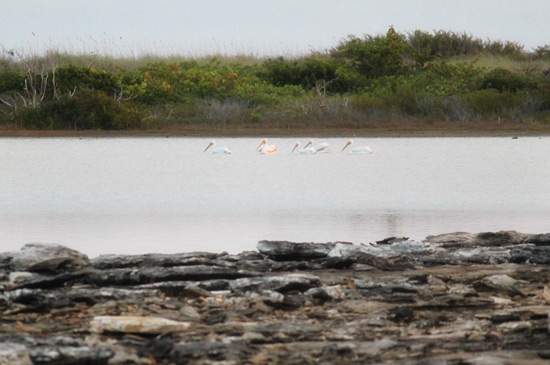 The pod paddled in the nearer pond, I discovered after parking. Good, less of a walk. I’d seen them much further away previously. As I tried to not-so-clumsily make my way to a good photo position, our star’s light energized the stark orange and white of the pelicans.

Taking my eyes off of them for a second, so as not to toe-stump the many loose rocks, I looked back, and they had taken off, now full squadron status. I hadn’t stayed at a Holiday Inn Express the night before, but kinda felt like it, as I whipped out our newly ebayed Canon EOS Rebel whatever, and Sport moded (i.e. idiot setting), two fly-overs these amazing creatures bestowed.

It was almost like they were performing for the camera, or bidding me and the pond that had been their home, farewell. 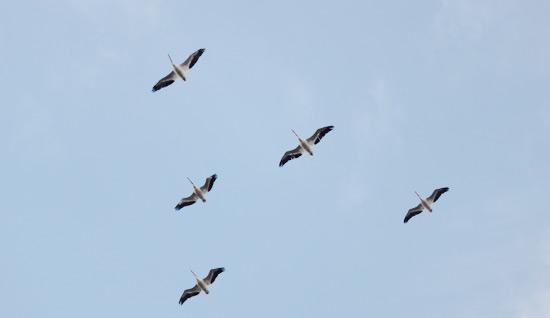 After the second loop, I watched them fly far to the north, slowly rising and working the wind, which still had some westerly to it. I waited, binoculars scanning. They were gone.

Facebook friends confirmed sightings of the species on a pond along Banks Road, Governor’s Harbour; probably the same squadron, fishing, resting… being pelicans. A longtime island homeowner posted of sightings he’d made throughout the years of a solo bird on the same pond I now stood. Abaconians also confirmed rare sightings. Boaters had encountered one tired-looking bird near Mutton Fish Point last winter. And digging back through the clogged brain cells I call my birding diary, I recalled what I now think was two or three American White Pelicans, coasting above the limestone ridges of Eleuthera Island Shores a year or two past. The moment remained no less magical, and I hope the photos convey even some small part of that.