Back at it again! Visitors share a memorable experience provided by fishing Guide Paul Petty in Eleuthera

By STAFF / in Eleuthera News / on Wednesday, 07 Aug 2013 09:26 PM / Comments Off on Back at it again! Visitors share a memorable experience provided by fishing Guide Paul Petty in Eleuthera / 1608

(Eleuthera, Bahamas) – Two friends, Al Hefferan and Bob Cypher from Pittsburgh PA were back in Eleuthera in July 2013, for their annual vacation, which invariably involves a bonefishing trip with guide Paul Petty.  As Al shared in 2012, the men typically do an annual 2 week vacation to Eleuthera, along with Bob’s wife Carol, and usually stay near French leave beach, one of the most beautiful in the Caribbean.

Al has once again, shared some details of his stay including a Barracuda catch on the water in the Rock Sound Area. They were out with Paul Petty on July 22nd – early in the morning, and came across what the visitor described as a, “Large Barracuda looking for his morning bonefish dinner.”  With their fang-like razor sharp teeth, Barracudas evoke fear in people and are also a predator of the bonefish population.

Al caught the Cuda, using light spinning tackle, with a 10 pound test line, and a green tube lure. The fish weighed about 40 pounds and it took 20 minutes to reel in. 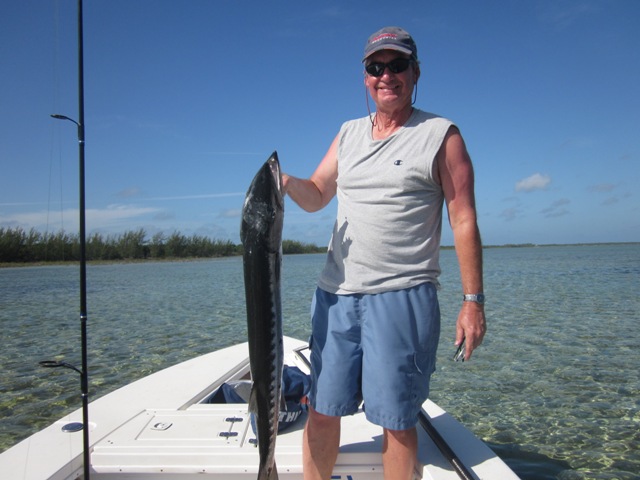 Al with his catch!

The men were photographed with the impressive catch which was donated by the tour guide to a local restaurant. According to the men, ” Paul is a wonderful guide and always finds fish for us.”

Later in the day, the visitors reported that they, “Caught 3 bones each.”

Guide Paul Petty can be also remembered as the only boat captain to pilot a vessel in rough seas to the Unit 2 beach in Hatchet Bay, that in May 2013 was the scene of a tragic incident, to assist in the unsuccessful search for two young men.

Up close and personal with the fearsome looking Barracuda

“About Eleuthera” in their own words

“This is our 5th trip to Eleuthera, and we love everything about the island. We frequently visit the Beach House and Tippys, and always go up to the Rainbow Inn. We were sorry to see that Cocodimama was closed. We visited the Cove for dinner and found it wonderful.

“We love the French Leave beach, and stay across the road at Richview, now 4 years in a row. We find the hospitality wonderful on the island, and it’s truly a treasure.

“We hope Eleuthera stays just as it is, and never changes!

“See you next year.”

One Eleuthera Foundation Assisting with COVID-19 Front Line in Eleuthera

Commentary: Technology to Address Issues On Eleuthera and Family Islands

Author: Carlyle W. F. Bethel. I recently saw a broadcast by one of our news stations reporting on a dire...