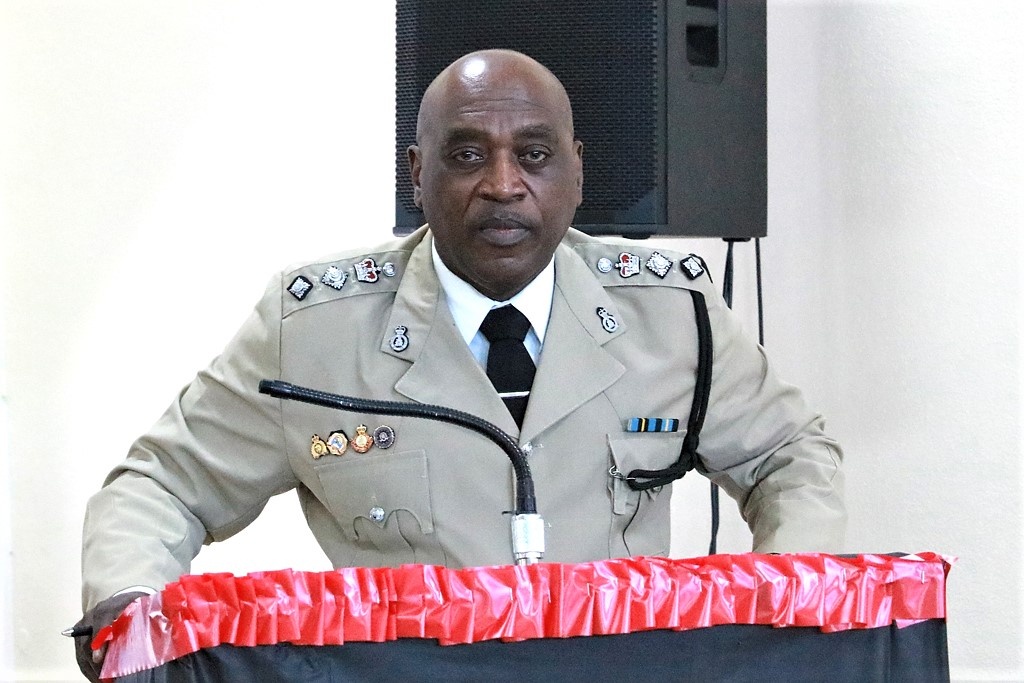 On January 18th, 2021, during his annual report address, Police Commissioner Rolle announced a number of transfers in the Executive team of the Royal Bahamas Police Force, including the transfer of Officer-In-Charge (OIC) for the Eleuthera Division, Chief Superintendent Stephen Adderley, as well as his second in command, Superintendent Frederick Sands, who were both transferred to posts in New Providence.

Replacing OIC Adderley in Eleuthera, was Chief Superintendent Brian Livingstone Rolle a 34 year veteran of the Royal Bahamas Police Force who began his new posting in Eleuthera, as the Commander and Officer-In-Charge of the Eleuthera Division on Monday, January 25th, 2021.  OIC Rolle was also accompanied by Superintendent Wil Hart, as the new second-in-command on Eleuthera.

In an interview with The Eleutheran on just his third day on the island, new Eleuthera OIC Rolle shared a bit of his history in the Force, and hopes for his new posting.

Ch/Supt. Rolle began his career in 1987 on the island of New Providence, where he was born and grew up.  As a young officer, he spent time in a number of local duty stations and in 1994 he moved into the Drug Enforcement Unit (DEU), after a successful stint at the Woodes Rogers Wharf with numerous arrests for drugs.  “I caught the eyes of the members of the Drug Enforcement Unit and they took me in,” shared Rolle.

He continued, “I spent the remainder of the first half of my career within the Drug Enforcement Unit in New Providence.  I achieved a number of firsts there, with successes in some major investigations – and moved on to become the first Crime Analyst in the DEU.”  His successes also attracted invitations to guest lecture at the Police Training College, training other officers in crime analysis.

With experience in both the technical side of investigations as well as intelligence, Rolle left New Providence as an Inspector and moved on to Grand Bahama, becoming the Officer-In-Charge of that branch of the DEU in 2008.  Moving through the ranks in the ten years that followed, Rolle rose to Superintendent.  He then moved to the Central Detective Unit (CDU) in 2018, taking over the reins as Commander for the CDU in Grand Bahama and the Northern Bahamas (Abaco and Bimini).  He remained as Superintendent until 2020, when he was promoted to Chief Superintendent, and placed in charge of Crime Management and Investigations for the Northern Bahamas, with responsibility for the renamed Central Detective Unit (CDU – later CID), Security Intelligence Branch (SIB), Drug Enforcement Unit (DEU), and the Central Intelligence Unit (CIU).  His next adventure would be Eleuthera.

“I believe that policing is a partnership,” said Rolle about his vision for his new challenge. “That is what I want to do in Eleuthera – partner with people so we can work together to achieve what needs to be done.  Through partnership, everyone has a stake in the success of what is to come.  I also believe in unity,” he stated, while citing a story about a group of animals who failed to work together, causing the demise of some of that group, and another set of animals who worked together to thwart off the attack of predators – resulting in the safety and successful escape of the entire group – an excellent example, he said, of how police could work in partnership with the community for the good of all.  “The strength of many together, can overcome the strength of the few criminal elements we have in our communities,” he emphasized.

Rolle stressed that he is a strong proponent of ‘intelligence’ in the policing field, and how important he thought it was for the public to have buy-in to provide information.  “We cannot solve and prevent everything, but if we get the public on our side, and they are willing to assist us in providing us with information that’s there – we can overcome whatever comes our way…  I believe that if we unify as a people through partnership, we can do this.”

Priorities for his first weeks and months on the island, shared Rolle, was to reach out to different stakeholders in the community, including local government administrators and councils, civic organizations like the Chamber, Rotary, community and religious leaders and others, and have regular meetings with people in key positions.  “I come here with experience, but Eleuthera is different from Grand Bahama, and I would like to tap into those brains and see what they think needs to be done.  I want to police ‘with’ them.”

Commenting on his predecessor’s accomplishments on the island using a construction analogy, Rolle said, “I was told on arrival that ‘the building has been constructed and I just have to complete the roof’, but after seeing what has been done here, ‘the roof’ is already on, I just have to turn on some lights – or to say it more clearly – show what has been done and focus on where we are going – the structure is already here.”

Since arriving on island, Rolle commented that he was struck by the welcoming friendliness of the people he had already met, and the neighbourly nature that shone through, adding that the success of the National Neighbourhood Watch program on Eleuthera was understandable, seeing the character of the communities.

He continued, “Eleutherans may see in the beginning of my time here an increase in police visibility.  I believe in excessive visibility of police, because that is how how we will work hard in the beginning, and get a handle on what we need to do – seeing who is coming in through airports, who is coming in on boats – then we can work easier, and Eleutherans can be relaxed in knowing that their island is safe.  Our intention in the Royal Bahamas Police Force is to make sure that our number one mandate is to create and keep safe communities.  Eleuthera is already a very safe community, so we will want to build on that.”

With no prior experience in or other connections to Eleuthera, and just one overnight visit many years ago while with the DEU, Chief Superintendent Rolle admitted to having a ‘slightly’ different view of Eleuthera as a small, Family Island before getting here to take up his post, sharing, “On arrival, I had no idea that Eleuthera was so vast.  Looking on the map, it looks to be just a skinny island – I can reach with one hand from this side to the next side, and touch the wall,” laughed Rolle about his naivety. “But then I came and realized quickly that it isn’t like that…”.  Rolle also shared his amazement of the rolling hills all along the island, saying with a smile and a chuckle, “for a while I thought I was in Jamaica – it’s just the hills are a little higher there.”  On a more serious note, he shared, “I realize that it’s a vast territory that I have been given to police.  However, every task that I have been given, I feel I’ve done a successful job, and this one will be no different.  I love the challenge and the opportunity this challenge presents.  I look forward to hitting the ground running.”

Rolle’s message to the public as he began his tenure on Eleuthera honed in on the concept of partnership.  He appealed, “Partner with us.  We are here to help.  We are with you, and are a part of you.  We will all make a difference if we work together.  In unity there is strength.  There are more of us who want safe communities, than those who don’t.  So, if we unite and stay focused in our partnership, we will overcome anything that comes up against us.”