Double Homicide Claims the Lives of a Father and Child

Police report today, that an adult father and his four-year old son were killed in Eleuthera on Saturday, October 3rd, 2020.  Authorities on the island are actively investigating the circumstances surrounding their deaths.

Reports indicate that shortly after 5pm, Police in Eleuthera were alerted to the fact that a man and his young son, were found unresponsive on a property in the settlement of Rock Sound.  Officers were said to have responded, and on arrival, they discovered the bodies of an adult male, and a juvenile male with apparent gun shot injuries.  The two victims were later pronounced dead.

Officers then received additional information that a white vehicle with two children, related to the victims at the double homicide scene, was also missing.

Reports say that detectives from the Criminal Investigations Department in New Providence were dispatched to Eleuthera.  A short time after their arrival, the investigators discovered the missing white vehicle through a dirt road, north of Rock Sound, with the two young children still inside and they were unharmed.

Police report that a number of people have been taken into custody in connection with this matter.  They are also appealing to members of the public, especially persons on Eleuthera, who may have any information that can assist with this investigation to contact the Police at 919, 911, Crime Stoppers or any police station in Eleuthera.

Nurse Monique Roberts-Cambridge (left) being presented with gifts by Nurse Edwards, representing the... 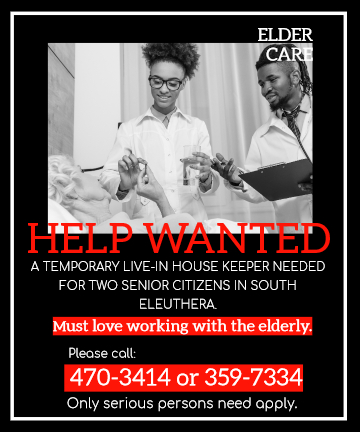